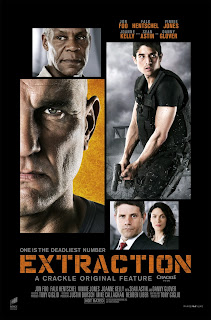 
When General Harding (Glover) instructs Mercy Callo (Foo) and his team to fly to Chechnya and EXTRACT a high-value target, Martin (Hentschel), from one of their infamous prisons, the mission isn't going to be easy. While Agent Meyers (Kelly) and Kyle Black (Astin) watch over the mission from their command center, Callo and the guys enter the prison - but they are ambushed and only Callo remains.

Even though he's found Martin, the evil (?) head of the prison, Ivan Rudovsky (Jones) has opened all the cells and instructs all the hardened prisoners to eliminate Callo and Martin. So the two guys must form an uneasy alliance in order to leave the Chechen prison alive. Who will survive this particular EXTRACTION?

Extraction - not to be confused with Extraction (2015) with Bruce Willis and our old pal Kellan Lutz - is a made-for-Crackle original movie. Because it was specifically made for this online streaming service, it's not as well known as it perhaps should be. As of this writing, you can't see it anywhere else. But it is a pioneer: According to the Internet Movie Database, Extraction is the first full-length feature film produced for the internet. We're happy that honor can go to an action film.

In 2013, we were all in the grip of two things: Homeland fever and The Raid (2011) fever. It seems writer/director Giglio had the idea to fuse those two things together, and Extraction is the result. Joanne Kelly plays the Carrie Mathison-esque character and Jon Foo (which is his name and not a new form of Martial Arts) plays the Peter Quinn-crossed-with-Rama main hero.

While Foo can definitely fight, he doesn't rate high in the charisma department (although that's nothing new in the world of action movies, as you doubtlessly well know). He's not likable on the level of a Gary Daniels, Richard Norton, or a Jet Li, but who is? Still, he acquits himself well. We last saw him in Universal Soldier: Regeneration (2009), but we never guessed he'd make the leap to central action hero, and we congratulate him on that. 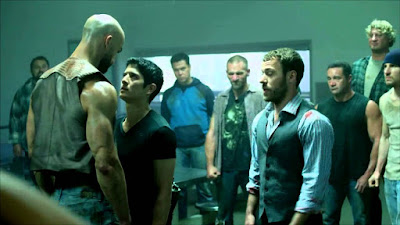 The fight in the weight room and parts of the final brawl are real highlights and are classic action setpieces. The main problem with Extraction is that it's too long. Trying to fit two Homeland episodes and parts of The Raid into one 106-minute film didn't really work as well as it could have or should have. It reminded us of Riot (2018), another recent action film with a somewhat similar plot (Chuck Liddell is in the Vinnie Jones role in that one) and that also had a bloated running time. Additionally, there are some horrendous CGI bullet hits that are SyFy Channel Original Movie territory. 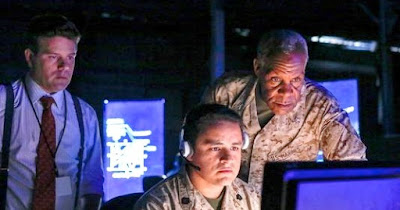 We only bring these complaints up because we know the makers of Extraction are capable of better. The stunts, fights, shooting, and violence are executed well. But it gets bogged down in unnecessary plot machinations the audience doesn't care much about. A lot of the 'Danny Glover and Sean Astin watching screens' scenes could have been cut down or eliminated altogether.

A lot of the 'intrigue' surrounding the Natalie character could have been trimmed as well. And there seems to be some misplaced slo-mo that could've been speeded up. (Don't get us wrong; we're fans of slo-mo, but why did we need to see a smoke bomb thrown in slow motion with operatic music behind it? It wasn't that big a deal). And the use of Beethoven's Ode to Joy only underlines, as if that was needed, its DieHardInA qualities.

Watching Extraction is a bit like playing the water level (AKA Labyrinth Zone) from the original Sonic the Hedgehog game for Genesis. Remember how right when Sonic is running out of air because he's underwater and can't breathe, you'd often find an air bubble and Sonic could continue? Well, with Extraction, right when our interest would wane - to a critical degree - something would happen and we'd perk back up and our interest continued. It was just like getting an air bubble. In most cases, that was when Vinnie Jones appeared. 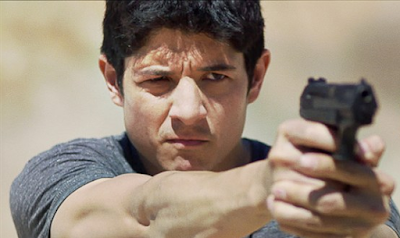 I think it's fair to say we're both big Vinnie Jones fans, and he adds a LOT to the movie. His presence is very much appreciated. It's a pleasure to watch him bark orders at people, punch and headbutt them, and pull threatening faces. Why does he always play a bad guy? He should be a hero in a DTV film. That would be a welcome change for both him and us, the audience. That should happen soon. Also he has a fish tank with bullets in it in his office. Sure, that's not as impressive as it being in the front yard like in Dance or Die, but it's something.

Hentschel as Martin exudes some Jeremy Piven-esque charm (has anyone ever said that before?) and adds some humor to the proceedings. There isn't exactly Punchfighting in the film, but it gets very close with a scene of Prisonfighting. Presumably prison inmates can't clutch cash in their hands as they scream and yell around the fighters, but they must have some sort of card for their commissary account.

There's a classic scene of someone screaming while shooting a machine gun, and it all ends with a time-honored twist you just may see coming if you watch a lot of these types of movies, but that doesn't really dampen the enjoyment of it. If anything, it ramps it up.

The Homeland-meets-the-Raid idea is a very good one, but the 106-minute running time dilutes its potential impact. If Extraction could've been tightened up a bit, we'd be dealing with a real winner. As it is, it gets very, very close but just misses that cigar. It gets an A for effort, but it's a one-time watch for us.

It was good for being a new-ish movie. I have the US DVD. I hope we will see more of Jon Foo.

We hope to see more of Foo too!