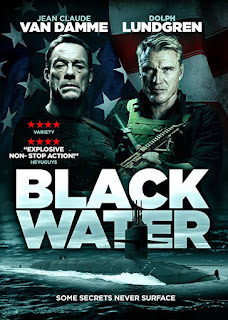 Wheeler (Van Damme) is described only as a "deep cover operative" for the government. He's also "The Best". Because his higher-ups, including Rhodes (Sapienza) and Ferris (Kilpatrick) think he "switched sides" and is now a traitor, they imprison him on a submarine.

Because they're stupid enough to think Van Damme switched sides, they deserve everything they may have coming to them. Marco (Dolph) is in the cell next to Wheeler's, and they quickly bond. While (endlessly) trying to figure out who crossed and double-crossed him, Wheeler, and, to a lesser extent, Marco, have to fight their way out of certain situations on this mysterious submarine. Who will resurface from the BLACK WATER?

A Submarine Slog by any other name...

Don't get us wrong, we're very happy that legends like Van Damme and Dolph are still working and delivering product to us, the fans. But Black Water isn't exactly in the same realm as the Universal Soldier series. Except perhaps Universal Soldier: The Return (1999). 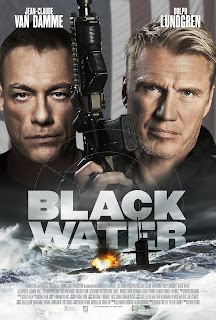 We're also happy that you can pretty much see what's going on, at least in the non-submarine moments. There are a handful of shooting and beat-em-up scenes that are executed well enough. Unfortunately, this is where all our goodwill runs out.

The main problem, at least for us, is that we were never fans of movies set on submarines (or Submarine Slogs, as we call them). It's just a dull, uninteresting setting that breeds repetition. This time around there are elements of prison movies and spy thrillers, but that honestly doesn't help things all that much.

I know we're talking about the world of DTV here, but Black Water isn't exactly theater-ready. It's more Wal-Mart ready. Have you ever been to a Wal-Mart (or some equivalent store), and you browse by the DVDs and Blu-Rays, and you see a movie - particularly an action movie - that you've never seen or heard of before? Like, "Black Water? What's this...?" This is pretty much one of those.

Hammering some heavy nails into this coffin are the fact that a. it's boring, b. it's very self-serious, but without much substance or reason to be, c. there's not enough Dolph, and d. the running time for all this is an inexcusable 105 minutes.

If Black Water (get the double meaning? In the movie, Van Damme mentions "black sites" and the title seems to be a reference to that mercenary group that changed its name to X, and also the fact that they're deep underwater) was 80 minutes and featured Dolph and Van Damme fighting through all the baddies that were trying to kill them, The Raid style, Black Water could've been a classic. But oh no, they couldn't do that. That would be too simple. They had to load up the movie with a bunch of inane dialogue about people trying to find "the dongle".

First it was the tape, then it was the disc, then it was the thumb drive, and now the MacGuffin of the modern age apparently is the dongle. Although it is sort of amusing to watch actors try to say the word "dongle" with a completely straight face.

So, sadly, the negatives of Black Water outweigh the positives. The viewer, who clearly would not even be watching this unless they're a fan of Dolph and Van Damme, is submerged in the muck and mire of submarine slogginess. While the two guys are both good in the movie itself, what's swirling around them is more of a cesspool.


Comeuppance Review by: Brett and Ty
Also check out write-ups from our buddies, DTVC and The Video Vacuum!
Posted by Ty at 12.10.20

I sense a deep sadness in this review as to what might have been. Is this the only movie that they appear together?

Let's not forget Universal Solider! How quickly we forget haha