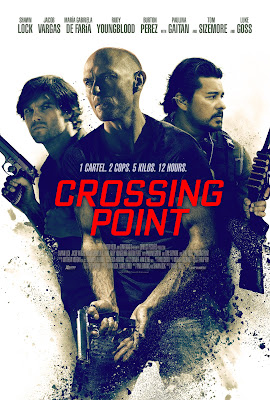 When Michael (Lock), his girlfriend Olivia (de Faria), and their two friends travel to Mexico for a little vacation, little do they know what they've stumbled into. Olivia gets kidnapped by some drug-dealing baddies, who force Michael to cross the border with a backpack full of said drugs, or else they say they'll kill Olivia.

Desperate and running out of time, Michael stumbles into Pedro (Sizemore), a man he thinks he can turn to for help. But who can he really trust? Meanwhile, hardworking cop Jesus Valencia (Vargas) is on the case, which leads to the entrance of Decker (Goss), an expert in these sorts of tense situations. Will Michael accomplish his mission and save Olivia? Or will something prevent him from reaching the CROSSING POINT?


As far as modern-day DTV actioners are concerned, Crossing Point isn't that bad. It's better than you probably think it is. It appears some energy and thought went into the production, and it's not mindlessly stupid like so many of its competitors. So we give it kudos for that. What the Sicario series is to mainstream cinemas, Crossing Point is to DTV. Keeping their budget constraints in mind, what they managed to pull together here deserves some credit.

It's still hard for us to see characters in these new movies constantly on their cell phones and drinking from plastic water bottles. You may have noticed that tough guys in the films of yore don't do these things. Of course, there's the tattooed stoner character with a man bun. He's the "Shaggy" of the piece. He seems like he should be shirtlessly playing the bongos with Matthew McConaughey. As for our hero, he's another effeminate millennial. He attempts to get less effeminate as the movie goes on, but it really seems like, in a prior age, he would have been on the cover of Tiger Beat magazine along with JTT and Andrew Keegan. Perhaps interestingly, Keegan was in April Rain (2014) with Luke Goss. 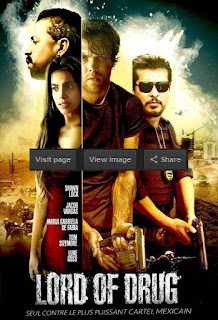 Speaking of Goss, he doesn't show up until the 70-minute mark and it's a cameo, despite being front and center on the box art. All the Goss fans out there may be disappointed by this so consider it a warning. As for Sizemore, he really livens up the scenes he's in and the movie as a whole. Again, it's more or less a glorified cameo, but he gets more screen time than Goss. We still have to wait 40 minutes to see him. It's more or less worth the wait, however. In Assassin's Game (2015), his name is El Viejo. In Crossing Point it's Pedro. Are people casting Tom Sizemore as some sort of Hispanic man now? When did this start? And why did it start?

Anyway, it should also be noted that there is a 24-esque timer that periodically pops up on screen to let us know how Michael is doing time-wise. Well, that aside, Crossing Point as a whole is at least trying, which is a good thing, of course. It's also relevant as far as what's in the news today with the border, etc.

In the end, Crossing Point is at least a one-time watch. It makes a valiant attempt to be a good and worthwhile movie, which is rarer than you might think these days.