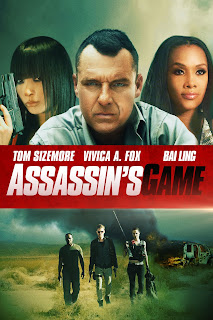 A man known only as El Viejo (Sizemore) is a crime boss of some sort. He’s so high up the food chain, he spends all his time in an outdoor junkyard/trailer park where he conducts his business. He waves around a gun and a book and yells at people. Vet Jones (Mikita) and his son, appropriately named Junior (Mentry) are father and son hitmen. Junior was supposed to assassinate a woman named Isabella, AKA “The Target” (Fox), but didn’t finish his mission.

So Vet Jones goes on “One Last Job” to get The Target, but sees what’s really going on, and he doesn’t like it. He tries to change the (Assassin’s) Game but then finds that that entails a lot of kick-punching and gun-shooting. Now Vet Jones has to save Isabella and Junior, all the while having to contend with the ultimate wrath of El Viejo – can he do it? And what does the mysterious woman known only as “The Bodyguard” (Ling) have to do with all this? (We just checked our Spanish-American dictionary and we’ve just been informed that El Viejo means “The Old”. It's also a principality in Nicaragua.


The thing about Assassin’s Game (not to be confused with Assassin’s Run) is that it’s just too stupid to hate. Most people would probably find its rock-bottom budget, 21st century DTV aesthetic, utterly mindless and sometimes grating dialogue, mind-numbing “plot” and dodgy acting off-putting. But Assassin’s Game pulls off a neat trick: each five seconds that passes is progressively dumber than the previous five. 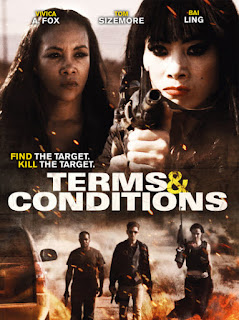 On the plus side, it is shot clearly and everything can be seen well. On the minus side, do we want to see what we’re seeing? For example, there is plenty of slo-mo on display. Fine. So far, so Chance Boudreaux. But then every time people fire their guns, we get those godforsaken CGI muzzle flashes that are so annoying to see. Whether they be in slo-mo or regular mo, why dwell on the fact that your muzzle flashes are so awful looking? It boggles the mind.

In the cast department, at least they managed to rustle up some good people. Sizemore almost single-handedly maintains the audience’s waning interest. Thank goodness he hams it up and chews scenery like he does. If he didn’t, we’d really be in dullsville.

Unfortunately, there are some long stretches where he’s nowhere to be seen. Enter “Grand Master” Mike Mikita, who could easily pass for the stunt double for Matthew McConaughey. Was Matt Mullins not available? Nevertheless, we can say without a doubt that he has the raw charisma and animal magnetism of Joe Gates. Or maybe Jay Gates.

Bai Ling seems to exclusively dwell in this zone of z-cinema, and she’s usually up to something interesting, or at least silly. Vivica A. Fox doesn’t get to do all that much, so the female fighting falls to Melissa Mars as Ruby. But Ling does say the classic line “we got company!” It’s in many action movies, so why not this one?


We would say it all ends with the time-honored Final Warehouse Fight, but most of what we’ve just seen takes place in a warehouse, so then the filmmakers probably felt they should finish things off with a Final Field Fight. It’s really more of a showdown, but why split hairs? Said filmmakers should probably realize that audiences are capable of more than they’re given credit for.


In the end, Assassin’s Game is disposable and not recommended. We’ve seen far worse, but, let’s face it, it’s pretty dopey and half-witted. Like we said before, we don’t hate it, but it did make us long for the 80’s-early-90’s glory days of DTV.

Comeuppance Review by: Ty and Brett
Posted by Ty at 1.9.20