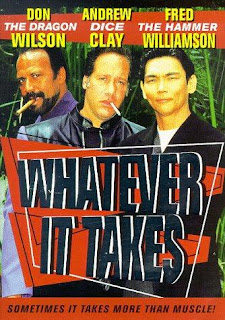 Neil DeMarco (Wilson) and Dave Menardi (Clay) are dedicated undercover officers on the L.A. beat. After their last mission goes wrong, Neil takes it hard and hits the bottle. But, thanks to Menardi's encouragement, and the urgency of the matter, DeMarco pulls himself together for their latest assignment. It finds them tackling one of the world's greatest evils: steroid use.
Working with some DEA agents, our heroes must infiltrate the world of meatheads. The latest 'roids on the street are said to bulk you up three times faster than any product ever before. But it's not all gyms, fitness instructors, and muscleman contests for DeMarco and Menardi - the big boss of them all is evil gangster Paulie Salano (Williamson), and his hulking sidekick Kevin (Smith) is always ready to do his bidding. Will our heroes finally stop the flow of Human Growth Hormone once and for all?


Much like the color wheel, there are many gradations of stupid. We've tackled this subject many times before, but it always seems to keep cropping up again and again. Thankfully for any and all viewers of Whatever it Takes, it's a very fun, funny, ridiculous shade of stupid that will entertain you thoroughly.

With the opening credits over close-ups of muscles as people work out, then leading into a classic 'drug shipment gone wrong' scenario - in a warehouse, no less - you know Whatever it Takes is going to deliver the goods, in that mindlessly 90's sort of way that we all love and enjoy.

Andrew "Dice" Clay doesn't exactly look the part of a cop, which is all part of the fun. Also Andrew "Dice" Clay gets to shoot guns and kill people. If that's not worth the price of admission, what would be? Oddly, Nils Allen Stewart, here in a cameo, plays a guy named "Andrew Clay". Coincidence? Clay makes his wisecracking cop role seem completely effortless, and he even includes a bizarre rant about farmers, of all people, at the tail end of the movie, as if it were an outtake from one of his comedy specials. Of course, he's no stranger to contests, as he was in No Contest (1995), of course.


Matching The Diceman's charisma is Fred Williamson, here in a rare badguy role. He has a great speech in the garden at his home towards the end of the movie. His sidekick Kevin looks like a 'roided up Shep Smith.

As far as The Dragon is concerned, he's involved in a very silly barfight, and has two dialogue scenes that include people flexing in the background. As if what they were saying wasn't interesting enough, and every possible frame of film had to be filled with meatheads at all times. We get to see a fight between The Dragon and The Hammer, and clearly director Brady MacKenzie (in his one and only credit) must have realized this was something fans have wanted to see, so he doesn't skimp. The fight is long and dragged-out, in a good way.

Whatever it Takes was ahead of its time. Not only did this pre-date the "juicing" scandals of Barry Bonds and Mark McGwire, it also beat The Substitute 3: Winner Takes All (1999), which had a steroid sub-plot, to the punch. Not to mention the James Franco comedy Whatever It Takes (2000). The existence of that film made it even trickier to procure this one from online retailers. Adding to that frustration, the tape was put out on the Pioneer label, which didn't get a lot of distribution here.

With our three favorite nicknames all together in one movie - The Dragon, The Diceman, and The Hammer, how could we refuse Whatever it Takes?
Comeuppance Review by: Brett and Ty
Posted by Ty at 12.8.21