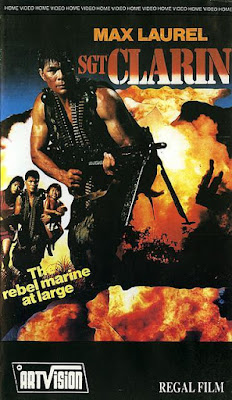 "The rebel marine at large"

Danny Clarin (Laurel) is just your average toughguy who gets into your average barfight. After mopping the floor with his opponent, he's spotted by some Marine recruiters who happen to be in the bar that night and they ask him if he wants to become a Marine and he instantly says yes. Much like Lana Turner being spotted in Schwab's Drugstore. With notably more punching. After completing his grueling training, Clarin is awarded the opportunity to be a non-commissioned Marine. His first task is to take down the bandits - who call themselves rebels - who are terrorizing a local village.

His engagement with his beloved Mary is put on hold because of this new mission. But, because the bandits are backed by some powerful interests behind the scenes, this job is not going to be easy. Already tough as nails, Clarin gets really mad after the baddies kill his mother and brother. Now burning with revenge, he leads his band of men through a gauntlet of shooting, blowing-up, punching, and maybe some more shooting. While many, many people are trying, will Sgt. Clarin eventually end up with a bullet for his head?

Max Laurel finally gets a nice starring role after usually being the support guy here with Clarin. Laurel had a hell of a year in 1988, having appeared in The Last American Soldier, Last Platoon, Cop Game, and one of our favorites, Robowar, along with Clarin. He's great in the film, whether marrying his true love Mary, being subjected to the time-honored Prerequisite Torture, saving naked children from the firebombs of the baddies, or in his default position of shooting people, blowing up their huts, or punching them in the face. He comes off as likable and a solid hero. While lots of people can walk through a jungle and mow down baddies with a machine gun and/or a flamethrower, only Laurel can do it in cutoff jean shorts and still look like a badass. 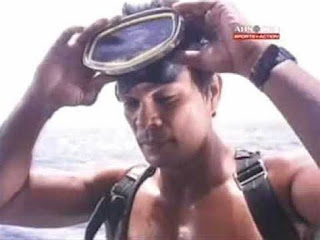 By the time of Clarin's release in 1990, the exploding hut subgenre was changing somewhat after its 80's heyday. In this case, it's a mixed bag; on the one hand, the technical side of the blood effects had improved, leading to cool-looking machete slashes and even a decapitation or two.

On the other, director Willie Dado presumably had the ability to look at the films made by his predecessors and learn from their mistakes. He should have known not to make the film too long. At almost 100 minutes, the film is too long. That might seem like a reasonable running time for a "normal" movie, but in the case of something like this, with no real plot to speak of and many, many, many scenes of jungle-shooting, it seems overlong. Especially before the climax, it spins its wheels.

We get that Dado was trying to make his own version of Platoon (1986) - and, perhaps not coincidentally, got Laurel to star because he was in the aforementioned Last Platoon - but, try as he might, it's not Platoon. But we give him points for trying.

The whole thing has that "third world" vibe, and while it's sad to see how impoverished The Philippines is, it makes for fascinating and compelling viewing. It just overstays its welcome, that's all. The movie's not bad in any way, shape, or form. But it seems like the sort of thing that would especially appeal to rural Asian audiences.
For better or worse, it seems like Americans and Europeans expect something a little bit different in their film viewing. Perhaps that's why Clarin has had almost no release history. Outside of its initial Philippines run and a belated 1994 Japanese VHS release, it seems very few people - and almost no Westerners - have been able to track down this quasi-lost film until the advent of YouTube. For that reason alone, it's certainly worth a watch.

We're lucky now to be able to see this piece of action film history. While overlong and plotless, exploding-hut aficionados will likely love it and Laurel's performance is a gem. The positives outweigh the negatives this time around, so we'll go aHEAD and recommend it.
Comeuppance Review by: Brett and Ty
Posted by Ty at 4.8.21