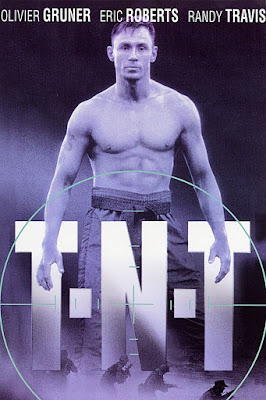 Alex Cheval (Gruner) is a member of TNT, or the Tactical Neutralization Squad. They're a group of Iraq War vets who are sent around the world to deal with sensitive issues that require them to beat up and shoot people. When one of the ops goes horribly wrong, Alex walks away from the group. Now known as an average guy named Mark, he gets a job as an aerobics instructor in a small town in Colorado. He's buddies with the local sheriff, Jim (Travis), and is in a relationship with Jamie (Staab), who has a daughter from a previous marriage (Blair).

Unfortunately for Alex/Mark, his new, idyllic life is about to be shattered. His former compatriots in TNT now work for an evil mastermind named Robert Victor Russo (Roberts), and because Russo doesn't want any loose ends, he turns loose the former TNT boys on Alex. Alex is then put in the position where he has to take on his former comrades-in-arms, highly-trained elite soldiers who want him dead at all costs. They include, but are not limited to, Greel (Jones), Basu (Olandt), and Choi (Rhee). Will Alex Cheval be able to protect his new family and his new life from the assailants formerly known as TNT?

From looking at the cover for TNT, which features a solo, shirtless Gruner, you'd be forgiven for thinking it was a Punchfighter. Surprisingly, it's actually not. It's more your standard 90's DTV actioner that starts off like one of those boring "war slog" movies, but transitions to a better scenario where the baddies are trying to get Gruner as he lives his suburban life. 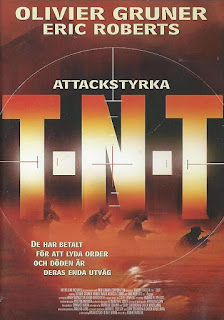 Sure, there's a certain moment that's highly reminiscent of The Specialist (1994), but there's one thing TNT has that The Specialist does not have: Randy Travis. It was an inspired casting choice, and his speaking voice is as comforting and soothing as his singing voice. Because TNT features a very Radical Jack-esque barfight, we're graced with the presence of a country singer, and it features a former elite soldier trying to start a new life in suburbia, not to mention the similar overall feel, it was hard not to make comparisons to 'Jack.

The barfight takes place at an establishment classily named Bullwinkle's. The daughter character in the movie mentions how they have a rockin' jukebox. One of the toughs Gruner beats up is Kane Hodder, who gets to show off a bit of humor, which is rare to see from him. On top of Bullwinkle's, the name of the gym where Alex works is The Penitentiary. So obviously the business owners in that particular small town have good senses of humor.

While there are plenty of B-Movie names on display, we wouldn't classify this as "Lone Tiger Effect" because TNT isn't bad, it's just a bit too bland for its own good. Eric Roberts, sporting a stylish beard, is just another cast member along with the rest. He doesn't get any particular time in the sun here.

Director Radler, known for Best of the Best (1989), Best of the Best II (1993), Showdown (1993), and The Substitute: Failure Is Not an Option (2001), delivers enough of the action goods so that TNT would find itself on video store shelves and in the cable listings. It doesn't exactly go "above and beyond the call of duty" to entertain us, but it does the minimum and features some of the silly moments we all love.

In the end, TNT is okay, all right, and fine, but it needed a bit more oomph to really make itself stand out from the pack.