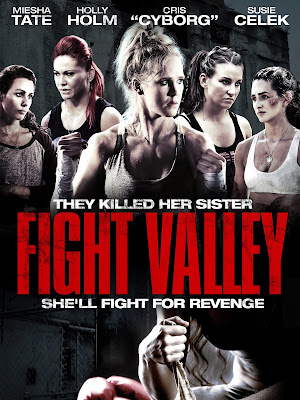 On the mean streets of Camden, New Jersey ("the murder capital of America", as we're informed), there is an undisclosed location where girls go to fight. Naturally enough, it's called Fight Valley. It seems only the shady underground fight promoters and the fighters themselves know where it is. When one of the ladies, who is a bit more untrained than the other, more hardened fighters, enters Fight Valley, trouble follows. Tori Coro (Durkalec) finds Fight Valley...but never leaves. Soon thereafter, her sister Windsor (Celek) endeavors to find out what happened to her.

The problem: Windsor comes from an upper-middle class or possibly rich background, and she doesn't fit in at all with the dwellers of the ghettos of Camden. Despite their socioeconomic differences, Windsor ends up befriending the "Knockaround Girls" - Tori's friends Jabs (Tate), Duke (O'Brien), Yanni (Kramer), and Jamie (Collesides). When it becomes apparent that the evil, Tong Po or Ivan The Russian-style baddie is a frightening woman named Church (Cyborg), Windsor and all the others train their hearts out for a big, final showdown in Fight Valley. Who will emerge - if I may borrow a phrase from Tori Spelling (as I often do) - vicTORIous? You'll find out soon enough...

Yes, Fight Valley is a low-budget Punchfighter with non-professional actors. But it's got heart, and, dare we say, charm. We here at Comeuppance Reviews are incredibly impressed that this film was completed and released to the world. It's on Amazon Prime, DVD, cable, and presumably it will hit other formats such as Blu-Ray at some point in the future. It was clearly a labor of love and we respect that. To all the haters out there who are crying into their Tapout shirts and proclaiming this is "the worst movie ever!!!!!" we say: you try doing what the makers of Fight Valley did. How many movies have you made? Oh, zero? Okay. Come back when you've actually risked something, created something, and released something.

In the meantime, all of us non-haters can brush aside the negativity and see that the Fight Valley cast and crew were trying. That goes a long way with us. Sure, it's not perfect and it has its flaws, but we say that about big-budget Hollywood productions. We try to judge everything on a level playing field. Much like Fight Valley itself. Viewers should expect going in that you're not going to get Master Thespian-level acting, but is that why you're watching Fight Valley to begin with? Just about everyone in the cast speaks with what you might call a 'flat affect', which we found endearing, not irritating. 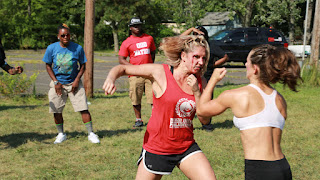 Compare that to Chokehold (2019), where the female fighters also had flat affects, but were also there to fight, primarily. Not win Oscars, Tonys, and Blockbuster Awards. Anyway, we wouldn't classify Fight Valley as a "Homie Movie", but it's THIS close. There are some strong Homie Movie influences on the production overall. Also, there's a good, old-fashioned training sequence towards the end that we enjoyed. Because it's 2016, the influence of Crossfit and moving tires around seems to have crept into the training montages. Call it a sign of the times.

The plot is your typical Punchfighting plot, and there's plenty of punching to go around. During the credits, in a little box on the side of the screen, we see behind-the-scenes stills that were taken during the production. It was endearing to see that. It's hard to beat the during-the-credits-and-in-a-box sequence of Attrition (2018), but, to be fair, no one could.


Fans of the real UFC fighters involved or anyone who enjoys female fight films will most likely be the target audience for Fight Valley.