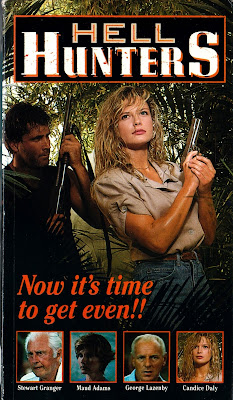 A woman named Amanda (Adams) is a Nazi hunter. She's hot on the trail of Martin Hoffmann (Granger), who, like a lot of his baddie brethren, absconded to Brazil. While in hiding on the outskirts of Rio, Hoffmann develops a serum (why are they always developing serums?) which would turn the world into faithful fascist followers. Amanda's daughter Ally (Daly) is attending USC nursing school and isn't at all familiar with her mom's Nazi-hunting ways. But, due to an unfortunate turn of events involving not just her mom but also her dad, Karl (Berger), Ally is forced to travel to Brazil to root out the Nazis herself.

Well, she does have help in the form of a hunk named Tonio (Arantes), a babe named Nelia (Cozza), and a Jack S. Daniels-style wild n' crazy guy named Nelson "Kong" Webster (McCubbin). This ragtag team of heroes will not only have to face off against Hoffmann, but also his goons, including lead goon Heinrich (Lazenby) and sub-goon El Pasado (Conde). The South American jungles can sure be hell...but will that stop the plucky HELL HUNTERS from completing their mission? Find out today...

Hell Hunters gets off to a bit of a slow start but gradually picks up speed. It slowly accelerates until its explosive conclusion, and, in the end, is a satisfying viewing experience. It's more or less an Exploding Hutter, but the Nazi hunting angle gives it a bit of a difference. The main thing that sets Hell Hunters apart from its jungle-dwelling cohorts of the day are the characters. Not only the prominent ones, but the little ones as well. There's always something wacky or at the very least mildly interesting going on. The supporting players help a lot, and the main cast puts it over the top. 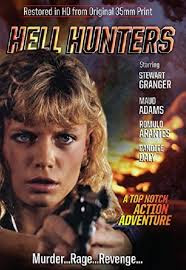 Stewart Granger is excellent as the main Nazi baddie. He puts in a charismatic, fun performance that only someone with a long career and a lot of experience could refine to that sort of point. Incidentally, Hoffmann has a framed picture of Hitler on his wall and a swastika flag in the dining room. Even his home decor screams "Man, I'm a devoted Nazi". He screens films of Nazi rallies in his den for himself and his buddies to watch as they smoke cigars, drink Cognac (presumably) and reminisce grandly about "the good old days". We haven't seen a Nazi this dedicated since John Savage had an evil glove drawer in Red Scorpion 2 (1994).

The assassin El Pasado is a real gem as well. He has one of the thickest unibrows we've ever seen, dresses in a white suit, and is heavily balding, except for a luxurious ponytail. Hey, it may look funny to you - and you'd be right - but you wouldn't want to see him coming for you in a dark alley at night. Thankfully, on the side of the good guys we have Kong. If anyone could possibly steal the movie from Granger, it's McCubbin. He's really a guy you'd want on your side. You can tell he likes to have a good time, and it's infectious.

The leading lady isn't Maud Adams as advertised, it's really Candice Daly from Cop Game (1988). Perhaps the people advertising the film were trying to play up the James Bond connection insofar as Adams and Lazenby are concerned. Hell Hunters isn't particularly Bond-esque but it does stand on its own two feet as an enjoyable jungle/Exploding Hutter.

When the very first line of the movie is something along the lines of "no more mistakes!" - which typically we have to wait until about mid-movie to hear - and ends with a triumphant Exploding Helicopter, you know Hell Hunters is worth checking out.