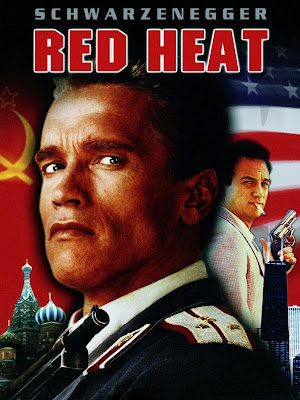 A violent, drug-dealing baddie named Viktor Rostavili (O'Ross) made a huge mistake. He shot and killed the partner of Moscow policeman Ivan Danko (Arnold). After Viktor flees to Chicago to continue his evil ways by associating with a gang called The Cleanheads, Danko follows. The no-nonsense Danko has only one thing on his mind: bring Viktor back to Russia to face justice. When he's teamed up with wisecracking Chicago cop Art Ridzik (Belushi), their personalities don't exactly mesh...at first. As cultures cross, mutual respect and cooperation grows. But are Danko and Ridzik in over their heads? Will they work together to bring down the baddies? You probably already know the answer...it's time for some RED HEAT!

Red Heat is a time-tested winner and an obvious 80's buddy cop classic. It was a mainstay on cable and on VHS during the golden age of the video store. Even people who aren't as die-hard into action movies (if you'll pardon the turn of phrase) as we are have likely seen it. Because it's a mainstream Hollywood production, it has all the high-quality production values you would expect it to have. The writing and direction by the great Walter Hill is, of course, excellent. It's total entertainment and a blast to watch from start to finish.

Arnold as Ivan Danko pioneered the "non-Russian playing a Russian" that Dolph specialized in later on in his career with such outings as The Russian Specialist (2005) and The Killing Machine (2010), among others. Now it's almost commonplace to do that, but Arnold was first. Speaking of similarities between Arnold and Dolph, Ivan Danko has the same "Russian Haircut" that the similarly-named Ivan Drago has in Rocky IV. Apparently filmmakers thought that having a square, spiky brush cut said to the audience "I'm a stony, humorless Russian". 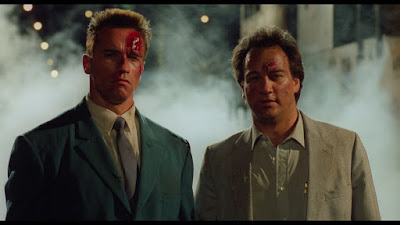 Of course, there is a lot of humor in the film, and it all works quite well. It's classic Arnie all the way. He makes a lot of great faces and has a ton of amusing stone-faced looks that he gives throughout the proceedings, mainly at Belushi. Those reactions are worth the price of admission alone. The timing and the chemistry between Schwarzenegger and Belushi is fantastic. It's a crucial element in any buddy cop adventure and here everybody nails it.

Red Heat can stand tall in the canon of the buddy cop action comedy boom of the 80's. It delivers what you want in spades. Remember when Jay Leno and Pat Morita were "As different as Hot Dogs and Sushi"? Well, as fondly as we remember Collision Course (1989), Red Heat is even better. I know, hard to believe. In part because of the power of Hollywood and Walter Hill, not only does the film have a great look to it, but there are plenty of fine character actors to fill out the cast. 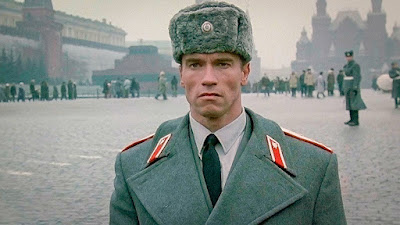 Standouts include Gina Gershon as Cat, the dance instructor caught in the middle of all the mayhem (and yes, there is one dance instruction scene), Peter Boyle as the harried police captain, Donnelly (aren't they always harried?) - although it must be said he doesn't really yell at Danko and Ridzik all that much, so he just barely misses the label of WYC but in spirit he really is. Laurence Fishburne is a fellow cop, Sven-Ole Thorsen is a shirtless Russian, and Brion James is, what else, a baddie underling. We could go on and on, but it all adds up to a lot of color and interest for the viewer.

I know we're having a lot of fun here today, but I do think it's important to quickly pause and remember the cultural context. In 1988, relations between the then-Soviet Union and America were typically frosty. TV news often reported on what was going on behind the Iron Curtain, and it usually took on an ominous tone. However, in just a year or two, the Berlin Wall was going to fall and presumably a thawing of the relations was in the offing. So the zeitgeist was perfect for a film like Red Heat, which mirrored that geopolitical situation in its own way. Perhaps less successfully, so did a film like Russkies (1987).

Anyway, they don't make movies like this anymore, which is a real shame. At least we have our VHS tapes, DVDs, and Blu-Rays to preserve this golden time of filmmaking. Just recently, Red Heat was released on 4K, which, as of this writing, not all that many films have been. The fact that it was chosen for a 4K release says a lot. I think its legacy is assured for a long time to come.

Also, it was nice to see the original bus chase. As you may know, both Rangers (2000) and Running Red (1999) used recycled Red Heat footage in their "bus-chase" finales. As we said, the legacy lives on. Featuring some classic sax on the soundtrack as the finishing touch to this 80's classic, it's very, very easy to love Red Heat.
Comeuppance Review by: Brett and Ty
Posted by Ty at 29.10.21