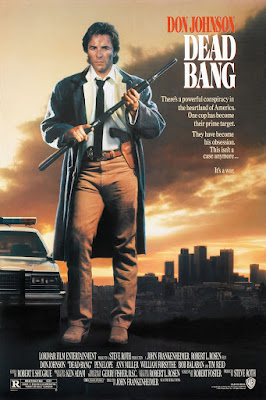 Jerry Beck (Johnson) is a COTE (Cop On The Edge) in L.A. He's having a bad day. His ex-wife slapped him with a restraining order against his kids, his granny glasses broke so he has to tape them together, and an evil baddie named Robert "Bobby" Burns (Military) killed a cop and is now on the run. Beck follows his trail to Oklahoma City, and then to Boulder, Colorado. All the while, a straitlaced FBI agent named Arthur Kressler (Forsythe) is on the hunt as well. He doesn't approve of Beck's rogue ways. Beck and Kressler uncover a white supremacist plot as they track Burns and try to bring him to justice. Will Jerry Beck finally get his man? Will all the shooting end with a DEAD BANG?

Dead Bang is a cop drama with some action moments in a typical Hollywood style. Legendary director John Frankenheimer gives it that professional sheen, along with a standard mainstream running time of 100 minutes. In the great year of 1989, many people were vying to be the latest, hottest action star, and Don Johnson was no different. He did a lot of action on Miami Vice, so naturally he probably figured he could translate that to the big screen, because it seemed like everyone else was trying their hand at it at the time.

'Vice's final season was in '89, and Johnson filmed Dead Bang during the 1988 writers strike. It seemed his future as an action star was assured. He could finally join the ranks of Stallone, Schwarzenegger, Van Damme, Seagal, Jeff Speakman, Edward Albert, Richard Norton, and Jay Roberts, Jr. Dead Bang is as good a showcase for his skills as any, but it seems he never officially became a tried-and-true, through-and-through action star. But that's not the fault of Johnson, Frankenheimer, or Dead Bang. 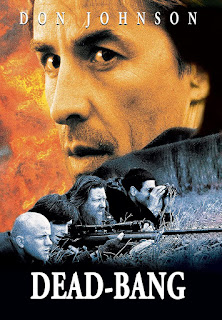 If it was shorter and Johnson had beat up or shot more people, that would have improved things. Dead Bang as it stands is not in any way bad, but things could have been tightened up a bit. A strength the film has is its supporting cast. Bob Balaban as a nerdy parole officer, Tim Reid as the Colorado Chief, Mickey Jones as one of the baddies, the Michael Pare-lookalike Frank Military as Bobby Burns (not to be confused with Seagal's Professor Robert Burns), the aforementioned fan favorite Forsythe as the FBI agent, among others.

There was a sort of wasted opportunity with Linda, Penelope Ann Miller's character. She didn't get to do very much and was seemingly here and gone in a flash. It would have been nice to see the relationship between her and Beck develop, and apparently there is more Linda footage on the cutting room floor. Maybe one day we'll get an extended Dead Bang director's cut. Until then, all these supporting characters, and others besides, kind of come and go in a rather picaresque manner.

It all comes to a head with an engaging climax in a tunnel. There's a shootout with the baddies in the time-honored manner. This was one of the movie highlights. Dead Bang is shot very well and the acting is above average. Of note is that Jerry Beck is a real life LAPD Detective and he appeared on the show COPS. His name appears in the credits of Dead Bang several times. We don't know what he thinks of the movie, but he probably approves, because who wouldn't want to be portrayed by Don Johnson?

In the end, Dead Bang is Hollywood action-drama that is executed well, and it's good. Not great, not awful, just good. There's nothing wrong with it, it's competent, but it doesn't rise to the level of awesome like it should have. John Frankenheimer would go on to make a better all-out action film with Ronin (1998). If you've seen that, then feel free to check out Dead Bang, as it does have a certain 1989 charm to it. But it's missing that one little extra ingredient to put it over the top.
Comeuppance Review by: Brett and Ty
Posted by Ty at 5.11.21

Frank Military? Is that name even real? A total classic.

He's in the right place!

The real Jerry Beck retired from the Los Angeles Sheriff in 1999 and passed away in 2015. He had two sons who followed his footsteps and became cops.

Appreciate the info\history on The Beckster