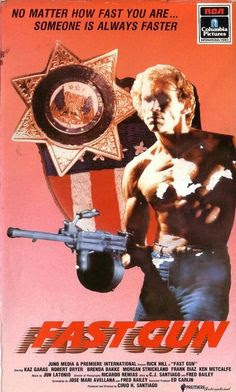 A gang of baddies led by Nelson (Dryer) are going around to different military bases and stealing their guns and ammunition. After hiding their stash, they decide to hole up in the small town of Granite Lake, California. The sheriff of this dusty ol' burg is one Jack Steiger (Hill). He once was a big-city L.A. cop, but after tragedy struck, he retreated to the country. You know the story. His girlfriend is the local barmaid, Julie Comstock (Bakke) and all seems peaceful in the town. That is, until Steiger gets wind of what's going on. Suddenly, in the peaceful town of Granite Lake, Hill has to fend off bikers, baddies, and ruthless CIA gunrunners. Will his skills as a FAST GUN save him now?

While set in the modern day, Fast Gun is clearly influenced by the Westerns of the past. Most of the action takes place on a classic Western street, with perhaps the only modern update being that this street has a video store on it. The plot overall isn't too dissimilar from the Westerns of yore. The difference this time around is that the baddies have rocket launchers and the lone hero has a machine gun! While Cirio has upped the firepower quotient, this is clearly a tribute to the Westerns he must have grown up watching.

In many ways, it follows a tried-and-true Cirio Santiago formula. That's not a bad thing. It's very similar to The Devastator (1986), which also starred Rick Hill, and Final Mission (1984), among others. There are even many names in the end credits stating certain cast members were "Marijuana Runners". There were marijuana runners in this movie? I thought that was the Devastator! Well, it doesn't really matter, because it all comes to a satisfying, explosive conclusion at the end of its wonderfully brief 75-minute running time. 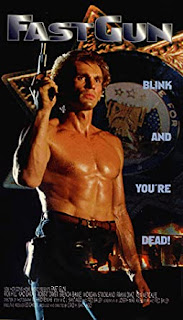 Rick Hill looks a lot like Peter Weller. Or perhaps Stephen McHattie. He inexplicably loses his shirt at the beginning of the final battle and spends the rest of the movie shirtless, sweaty and machine gun-shooting. As all heroes should be, obviously. As his paramour Julie, Brenda Bakke has a fairly thankless role but at least she's pleasing to the eye. We last saw her in Fist Fighter (1989), so it was nice to see her again. Hopefully it won't be the last time. Lead baddie Robert Dryer looks a lot like Paul Koslo from The Annihilators (1985), but we've been assured they're not the same person.

To quote Tesla, "It's a showdown in a no-man's land

For the cowboy of the modern day.

Come on, sundown, don't be hangin' round

'Cause the cowboy will blow you away."

Never mind the fact that this song was recorded before Fast Gun was released. We're fairly sure Tesla was watching Fast Gun and were heavily influenced by it. And by "blow you away", they obviously meant by Rick Hill toting a machine gun.

If you can find the VHS of Fast Gun, we say pick it up. It's short, to the point, and delivers the goods. It's hard to ask for more.