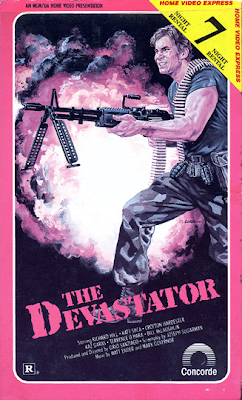 
One of the best things about The Devastator is that it is no-nonsense, no-frills action fun that packs a good punch at 79 minutes.

Deacon "Deke" Porter (Hill) is a Vietnam Vet, who heads into the sleepy little town of King's Ransom, California. He's there to investigate the death of his 'Nam buddy Marcus Dearing. Unfortunately, the town is run by a coterie of redneck pot growers, the ringleader being the nefarious John Carey (Hardesterm). They even have Sheriff Clay Marsh (Kaz Garas) in their pocket. They don't cotton to outsiders, so when Deke comes sniffing around their turf, a war ensues. Luckily, Deke has an ace in the hole: his old army buddies Spence (the electronics expert) and Ox (The goofy, loud punchfighter) (Daniels) to help him out.

Who will be victorious? The smarmy bastard John Carey or will the mighty hero Ox reign supreme?

Hill as Deke is bit bland to be an action hero and he has an unflattering overbite. This doesn't stop him from being a slickster with the ladies and wearing his Member's Only jacket while sitting on a chair backwards so he can "rap" with people. Thankfully Jack S. Daniels (great name) is an American treasure to be discovered again and again! We need more men like him in the movies and in real life. 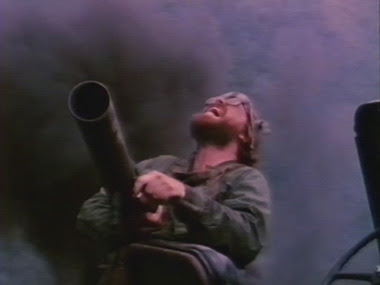 While most films of this era were concentrating on evil cocaine-related baddies, The Devastator goes the opposite direction and shows evil pot growers. John Carey is a hilarious name for the main villain. When they say his name in the film, you think of the failed presidential candidate windsurfing, and throwing HIS Vietnam medals over a fence. Where are the Swift Boat Veterans For Truth when you need them?

Directed by prolific fan-favorite Cirio (we are on a first name basis), this bears a similarity to the classic Final Mission (1984), it even has the same gratuitous fan-favorite death, decapitation. One of the strongest aspects of the movie is that it has a double-revenge plot. Deke has to get revenge for his fallen buddy and for himself.

In the U.S., The Devastator was released on VHS in one of those great MGM\UA big boxes. You gotta love 'em. If you don't like VHS big boxes, you are a traitor to our great country.

Ox it up tonight with this classic!

This is a classic Cirio picture. I bought the U.S. big box second-hand some time ago. When I inserted the cassette into my VHS player and pressed play, it gave off a terrible scream, like nails on a blackboard. I fast-forwarded to the end, then rewinded to the beginning, the ghost of Cirio had been exorcised, and the tape played without problems afterwards. The U.S. big boxes were truly awesome!

Haha! That is a great story.