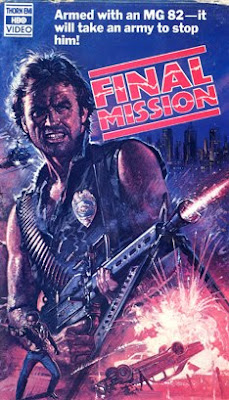 
Who can resist another story about a guy who comes back from Vietnam and gets revenge on some bad guys? NOT US!

Final Mission is trying to ride the coattails of the contemporary classic First Blood (1982). There are many similarities but 'Mission has its own charm.

Vince Deacon (Young) is fighting in the jungle of Laos. It turns out his former buddy Slater (Dresden) is a traitor working with the VC. After an unnecessary but surprisingly welcome decapitation, we are brought into present day L.A., where Deacon is a tough guy working for the LAPD SWAT team. He breaks up a kidnapping, dispatching the baddie with ease. He gets suspended for excessive force by classic Irish Captain, Captain O'Riley.

Deacon goes on a vacation with his wife and son (who has a bowl haircut) to Pinesville, a rural fishing area. The family is cavorting around and having a grand ole time, then tragedy strikes. A boat explosion kills Deacon's wife and son. Now Deacon is roaring through the small town and trying to get answers and bloody revenge. The sheriff in Pinesville, who resembles Bocephus-era Hank Williams Jr., is a corrupt yokel and his deputy "Moose" is no better. Slater lives on a ranch in town and the local police which may or may not include his brother are all against Vince. But Vince has two tricks up his sleeve, one is his partner Isaac (Ross) who comes to his aid, and the other trick is to break into a weapons store and steal a gigantic machine gun. Which is apparently called an MG-82. Most small town gun stores have an MG-82 and unlimited ammo right behind the glass.

What ensues is a barrage of gun-shooting, grenade-throwing violent assault and it goes so out of hand the Army has to step in to stop one man. It's the actual army vs. the steadily-going-insane one man army. Luckily, Vince is the woods just like in First Blood. Will the war ever be over for Deacon? Find out today!

One of the best parts of the movie is the theme song to Final Mission called "Always On My Mind" by Steve Butler. Not to be confused with the Willie Nelson song of the same name. This is a rockin' tune in the A.O.R. vein of Foreigner and Rainbow. The filmmakers know they have a hit song on their hands because they play it at least four times.

Accept this "Mission" and watch this classic tonight!

Extra Note: Some writing credits go to Anthony Maharaj, the co-conspirator of Richard Norton and writer/director of his classic film Kick Fighter (1987) and director of his film Cross Fire (1988), as well as Joe Mari Avellana of Field of Fire (1991) fame. Who could forget Captain Phat?

Truly definitive rudeness on a grand scale. I truly believe this is the best VHS cover for any action film ever. It's been my Facebook profile pic at least 4 times. Vince Deacon, what a name!

That is really cool that this was your profile pic too.