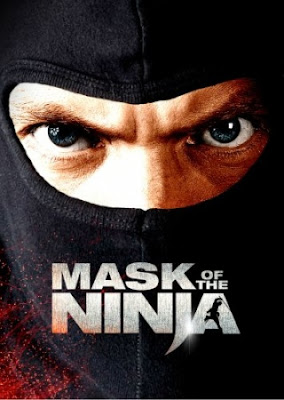 Directed by: Bradford May

Jack Barrett (Van Dien) is an L.A. cop who may not be quite on the edge, but he has a slight attitude problem. Things get a whole lot more complicated for him and his partner Gina (Young) when Mr. Takeo (Lee) of the Takeo Corporation is murdered by ninjas. That's right, ninjas are involved in corporate intrigue too. Now they're after his daughter Miko (Wu), so Barrett teams up with a ninja expert named Hiro (Wong) to protect the girl and save themselves in the process. But it's not going to be easy, because these particular ninjas are ruthless killers and many fights ensue. Who truly wears the MASK OF THE NINJA?

What with the advent of Ninja Assassin (2009), Ninja (2009), Ninja 2: Shadow of a Tear (2013), and now Mask of the Ninja, it would seem that a new Ninja Boom was upon us. Of course, in the 80's, video store shelves were filled with ninja movies, and these are just four examples, so maybe not. But if there ever was going to be a second Ninja Boom, this is certainly the way it would start. Maybe it was too much to ask. Besides, Mask of the Ninja is no Ninja III: The Domination (1984), let's just put it that way. But, to be fair, what movie is? It's pretty much impossible to beat that all-time classic, and 'Mask barely reaches American Ninja 4 (1990) territory.

It all begins promisingly enough with Casper Van Dien on stage in an L.A. club rockin' out on guitar. So far so good. He's wearing a vest and naturally it will put you in mind of The Revenger (1990), only in that case it was Frank Zagarino and his smooth sax stylings. Because Van Dien is a cop on the case, and 'Mask was made for TV, we couldn't help but think this could be the pilot for a Van Dien procedural TV series. He could team up with his charismatic partner Gina for a few seasons of crimefighting adventures. It wouldn't have to be an "East meets West" kind of thing like 'Mask, it could be anything, really. Unfortunately, that wasn't to be, but Van Dien has been in tons and tons of DTV and non-DTV movies so there will never be any Casper shortages anytime soon. Thank goodness. 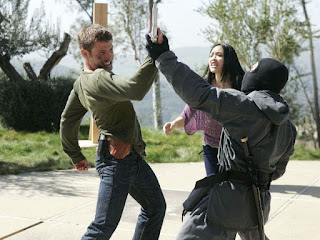 The problem with 'Mask is the way the fight scenes are filmed. It's non-stop quick cuts, flash cuts, "shake" cuts, and every other kind of distracting, unnecessary cut. The fights should have played out more normally and naturally. It's clear enough that everyone involved can fight, and surely there were quality fight choreographers involved, so all this unnecessary "flash" was not necessary. There were some very cool moments mixed in with all of that (we won't spoil some of those moments) but jeez, enough with the quick cuts and trickery already.

Especially towards the end, the movie actually starts to drag because the intrigue and the story isn't quite enough to carry things along for 90 minutes. It's a standard running time, it's not like it's too long or anything, but what we get just isn't interesting enough to sustain even that. We liked the guitar-based soundtrack, but overall things could have been improved if the story was more interesting and the fight scenes were shot better.

It should be noted that the DVD box art is very cool, but misleading. The DVD itself comes in a black slipcase that is die-cut to have "eye-holes" like a ninja mask. It slips over a picture of Van Dien's face, so when you move the slipcase on or off, it appears that Van Dien is wearing a ninja mask. We give full marks to whoever thought of that as a design idea. The problem is that Van Dien himself is a cop in the film, and not a ninja. So if you go in expecting Van Dien as a ninja, you're not going to get that. You get a good amount of other ninjas, including the prerequisite throwing stars and such, but it's not him. He fights the evil ninjas, so that works well enough.


In the end, Mask of the Ninja is just okay. It skates by, but it has too many problems for us to give it a wholehearted recommendation.
Comeuppance Review by: Brett and Ty
Also check out a write-up from our buddy, The Video Vacuum!
Posted by Ty at 11.2.22