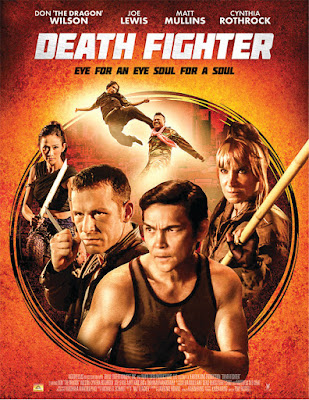 Michael Turner (Mullins) is an American FBI agent on assignment in Thailand. Along with his partner Conrad (Lewis), the two men interrupt a gold deal in a warehouse and, you guessed it, it goes wrong. All hell breaks loose and, sadly, Conrad doesn't make it out alive. It transpires that the maniacal mastermind in the region is a man named Draco (Velicitat). He has his hands in all sorts of dirty dealings, and a woman named Valerie (Rothrock) is one of his underlings.
After seeking the traditional approval of the Thai authorities and not receiving it, Turner finds a mysterious man named Bobby Pau (The Dragon), who is described as a "former Special Ops soldier and part-time alcoholic". The two of them, along with a woman named Yui (Chiranan Manochaem) go after the Draco gang with all the fighting skills they have. But will it be enough? Who, as it turns out, will be the DEATH FIGHTER?

Death Fighter is an enjoyable throwback to the 80's style of Martial Arts action film. It was refreshing to see that the filmmakers were actually trying in this age of apathy and mediocrity. A big indicator that the movie's heart was in the right place was the casting of Don The Dragon and Cynthia Rothrock, two fan favorites that are near and dear to every action fan's heart. They even fight each other during the big climactic battle, which is a showdown we as fans have waited 20-plus years to see. Frankly, it could have been a bit longer and with no cutaways to the Matt Mullins fight going on at the same time, but it was entertaining, and we're glad it happened in the first place. 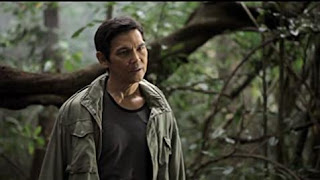 Rothrock gets a great introduction in the film, cracking a whip like one of the baddie-esses in the first two Double Dragon games for Nintendo. It's not often she plays a villain, so it was refreshing for the audience to see that, and it was probably novel for her too, so that was a smart choice all around. Both Rothrock and Don the Dragon appeared in the jungle together just the year before with Showdown in Manila (2016). Evidently someone thought that formula worked well, so they put the two back in the jungle this time around as well. 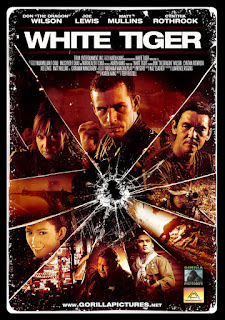 Just to clarify, Death Fighter is not an exploding hutter. It's a Martial-Arts based actioner that happens to take place in large part in the Thai jungle. There are huts, but they remain for the most part structurally intact.

The extended jungle fight scene was a movie highlight. Great Martial Arts, high energy, and just a pleasure to watch. Of course, the time-honored barfight and the climactic battle are worth noting, but that big, long fight about midway through the film is the showstopper.

Either Don, Cynthia, or someone else should have played the lead, because Matt Mullins, though he can clearly do Martial Arts, is a bit like the Freddie Prinze, Jr. of action. It leads back to the time-honored question of which is better: get a Martial Artist who can act, or train an actor to do Martial Arts? Mullins has the moves, but his acting is CW channel-level at best. When he's not doing the physical action, he comes off as a bit of a wimp. It's an improvement over Bloodfist 2050 (2005), but just about anything would be. His abilities are firmly on the action side of things.

There are a range of charming accents throughout the film, and fairly ridiculous dialogue, such as when the evil smuggler Draco is described as a warlord and a diabolical murderer...as opposed to a nice, friendly warlord. Additionally, we hope to see more from Manochaem, who, as of this writing, has done only this film. If nothing else, Death Fighter more than proves that Don and Cynthia have still "got it" after all these years, but that newer action stars like Mullins or Manochaem (well, she could be an action star if she wanted to be) are in the mix as well, right next to them. It's two generations fighting alongside each other. That was cool to see.

While it's more or less plotless (the entire plot for the 88 minute running time is "we've got to get Draco!") - at least that allows for extended fight scenes, which are executed well. While it won't change your life, Death Fighter is a fun and knowing nod back to the golden age of video store action.
Comeuppance Review by: Brett and Ty
Also check out a write-up by our buddy, DTVC!
Posted by Ty at 18.2.22