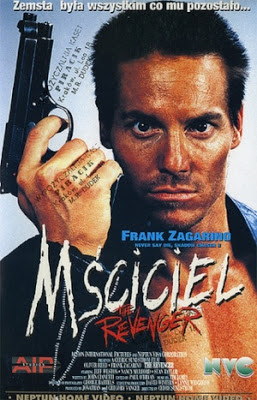 Mike Keller (Zagarino) lives to play smooth jazz on his sax. Interrupting his quest to achieve ultimate smoothitude, his buddy Mackie (Vosloo) shows up at one of his gigs one night and forces him at gunpoint to drive him and his supposed snuff/porno films and cash to criminal kingpin Jack Fisher (Reed). Though innocent, Keller serves jail time in the aftermath of this escapade. Once out of the slammer, he just wants to put back the broken pieces of his life with his loving wife Lisa (Mulford). But Fisher and his goons believe Keller still has the missing money, $500,000 to be exact. So Fisher kidnaps Lisa. Keller then calls upon his old Vietnam compatriot Harry (Celentano) to help him rescue her. Then they go on the run in the country for a while. Throwing caution to the wind, Keller blatantly disregards the fact that “Revenger” is not a real word, and summons all his best revengering skills for his revengering mission. Will he succeed?

The first thing you will see when you pop The Revenger into your VCR (or now DVD player) is a shirtless Frank Zagarino doing his workout routine. The intellectual levels of this film do not rise from here on out. This movie happens to be the second best Zags movie we’ve seen to date, the best being Striker (1987). Both are AIP releases. Could this be a coincidence? The Zagster never should have zigged from AIP. He clearly did his best work there, and the quality of his releases only went downhill from here. But this was released in the magic year of 1989, possibly the best and most fruitful year for video stores in the VHS era. So everyone was winning back then, and Zags and his comrades got swept along for the ride. 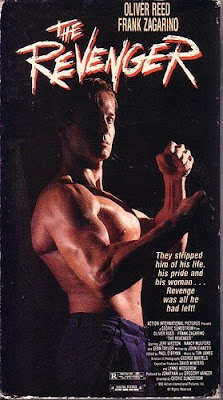 Arnold Vosloo is on hand, but for an unfortunately short amount of time. He barely warrants a credit, only appearing at the end of the end-credits listing. His 80’s coolguy sport coat with the rolled-up sleeves at least should have warranted a higher placing in the cast. Zagarino’s eyepatchioed war buddy strongly resembled Timothy Bottoms, and he even has a poster for the movie Zachariah (1971) on his wall. Of course there’s the obligatory Zags shower scene (ugh), and naturally, Keller is an “ex-Marine”. But now his buddies call him “The Saxman”. But we don’t care what anybody says: we love Oliver Reed, even in his “down on his luck” career phase. He provides more entertainment value when he’s just phoning it in than most actors do when they’re trying their best. And isn’t that what it’s all about? Sporting a ridiculous (fake?) walrus mustache that makes him look like Mario, Reed steals the movie from Zags, but that’s not saying much, anyone could steal a movie from a tree.

We don’t want to be hard on Reed -  as we said, we love him, and it’s not his fault this movie is so dumb. It’s not annoying, it’s just very, very stupid. Keep in mind the director is Cedric Sundstrom, the director of American Ninja 3: Blood Hunt (1989) and American Ninja 4: The Annihilation (1990), two of that series’ worst entries. Meathead John Pasternak is also in American Ninja 4, as well as American Ninja 2: The Confrontation (1987), so those bases are covered. He also has a great acid washed jean jacket.

AIP stalwart Steve McClintock turns in another exemplary song, “It’s Still Only Love”, and this song is by far one of the best aspects of this movie. This isn’t the first time one of McClintock’s songs has stolen a  movie. When is a CD of all his soundtrack songs going to come out?  Anyway, The Revenger is almost audience-insultingly stupid at times, but it’s not BAD, if that makes any sense. The only people who won’t like it are people too offended to get their hands dirty with dumb movies, and we presume those people don’t read this site. So if you’re not offended by a little out-and-out stupidity, don’t be afraid of The Revenger.

Comeuppance Review by: Brett and Ty
Posted by Ty at 8.4.13

Dude, you had me at "Mike Keller (Zagarino) lives to play smooth jazz on his sax." Just ordered a copy for 1p from Amazon. Sounds awesome. The fact that people refer to him as Saxman reminds me off that Lonely Island/Jack Black sketch.

Happy you just bought it. The more people that own The Revenger, the better. What a deal.

I completely agree with your review. It's a solid action movie, although far from spectacular. McClintock always has great songs. The song at the end of Rage To Kill was awesome. Zags had some other great movies, too. Without Mercy and Blood Warriors spring to mind, not to forget the North Korean action epic Ten Zan.

We'll looking for Ten Zan and it's hard to get a hold of. We've seen Without Mercy and a review will be forthcoming.

Of course we remember, "Do you remember love"! Great tune.

After some shirtless exercises, a shower, and a ride in my convertible. I might call up some old 'Nam buddies and crank this one up.

But let me roll up the sleeves of my sportcoat first.

Thanks! Haha...sounds like a killer plan. Good idea about the sportcoat.