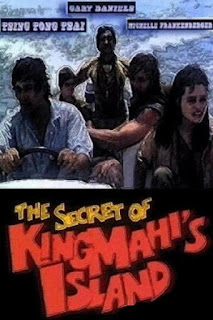 A man named Chuck (Daniels) is a treasure hunter. He and his close band of buddies find themselves in the rural, jungle-enclosed areas of the Philippines doing what they do best. I.e., hunting treasure. They're in this particular area of the world because they're on the hunt for a map that would lead to a hidden cache of gold, supposedly left there long ago by a certain King Mahi.
Of course, a baddie named Ben (East) and his minions are also looking for the map. During the course of their evil map search, they kill a father named Vince, and in his dying moments he gives a boomerang to his son. As you do. Joe (Kurt Otto Frankenberger) and his sister Leah (Michelle Frankenberger), presumably real-life siblings, join Chuck and his crew on their quest. Leah is also handy with a bow and arrow. This ragtag bunch of misfits then team up with friendly local people to find the treasure and wipe out the bad guys. Who will uncover THE SECRET OF KING MAHI'S ISLAND?
The Secret of King Mahi's Island starts off with several paragraphs of on-screen text that is light blue on a patterned background that you absolutely cannot read. We think it had something to do with the origin of King Mahi and his gold, but we can't be totally sure. Starting off on that note isn't exactly the most auspicious way to kick off the film, but things do get better from there. 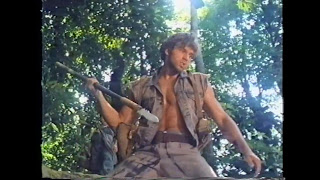 You know 'Mahi is a Philippines-set jungle actioner due to the cast: Jerry Beyer, Anthony East, Jim Moss, and Jim Gaines (who evidently also performed uncredited co-direction work on the film), among other mainstays, are all here. We also get other classic credits such as Gomez (just Gomez) as 'Chief Right Hand Man', William Romero as 'Black Legs', Tsing Tong Tsai as Kimo (presumably not the same guy as the one in The Ultimate Fight), Anthony Ogunsanya as Tatu (presumably not the Russian pop duo), and a personal favorite, Boy Clinton as Boy.
Naturally, there are lots of silly lines (and silly line readings and funny dubbing). Of course, the main baddie warns his charges that he doesn't want any more mistakes. Gary Daniels should have done more Martial Arts than he does in the film, but what we get is decent enough. He does wear a sleeveless stonewashed denim shirt with acid-washed jeans, which may be the 80's version of not mixing plaids and stripes, but it's one of those "Only in the 80's" outfits that endear the viewer to the film overall.
He also wears an Indiana Jones-esque hat, and the soundtrack by Mon Del Rosario is John Williams with one synthesizer, further underlying that 'Mahi leans more towards adventure than straight-out action. You have to admire that a first-time (and only-time) director, one Leonard Hayes, attempted to create an Indiana Jones-esque movie with minimal money in the Philippine jungle. Maybe that's why Gaines had to step in to help him out; perhaps Hayes got in over his head. But the fact that he tried was extremely impressive, and shows what a golden time it was in that era of filmmaking. Filmmakers must have thought that they could try anything and just see if it worked. There seemed to be little fear of failure. That's why we have all these fantastic 80's movies we have today. Unfortunately, the film barely got a release at the time, but thanks to the magic of the Internet, we can now all see it.
Other highlights include the very excitable Joe, who is clearly the Bin Bin of this movie, there's an exploding helicopter, and a dance sequence involving the native peoples. It's like one of those Italian cannibal movies but without any of the cannibalism. Overall it's better than Dudikoff's River of Death (1989).
'Mahi was one of the rarest Gary Daniels movies to track down. Apparently it got only a minuscule DTV release in 1988 in the Philippines, Spain and Japan. Collectors have been trying to get a hold of it ever since, with hardly any luck. But, as referenced earlier, it's out there these days for all the world to see. Is it the best Gary Daniels movie out there? Not by a long stretch, but Daniels fans will definitely want to check it out. Jungle adventure buffs will enjoy it as well, and anyone who likes hard-to-find action films will be able to get something out of it. But don't go in expecting another Recoil (1998).
Comeuppance Review by: Brett and Ty
Also check out a write-up by our buddy, DTVC!
Posted by Ty at 8.4.22

From I remember this one was better than Fatal Blade! Haha

Its worth another look