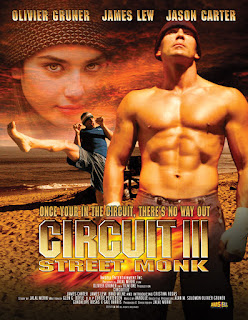 After Circuiting it up over the past two films, our old pal Dirk Longstreet (Gruner) has renounced fighting and becomes a surfer. He lives in a van down by the ocean and just wants to be left alone to hang ten to his heart's content. Things change for Longstreet when he rescues a young girl named Cherrie Wendover (Rose) from a bunch of thugs. The baddies were after her because she knows the truth about Octavio Ventura (Carter), a man who stages illegal Punchfights to the death at a strip club called the Playpen.


When Cherrie gets kidnapped, Ventura forces Longstreet to come out of retirement in order to win her freedom. But he has to fight the current champion, Stuart "Spider" Webb (Lew), among others. Meanwhile, both Editor Bill (Merhi) and Detective Sykes (Avedon) want to figure out what's going on. Will this be the FINAL FLIGHT - or is it FIGHT - for THE STREET MONK, Dirk Longstreet?

Okay, we know that Dirk Longstreet is an awesome name, but we established that a long time ago. At this point, the whole "Circuit" thing is starting to wear a bit thin. It has an even cheaper look to it than the other installments, which wouldn't be such a bad thing in itself if the writing wasn't so monosyllabic, monotonous, and moronic. Yes, the whole thing is very, very dumb. While you shouldn't run to the Circuit series expecting intelligence, it still comes off as somehow disappointingly stupid.


There are only a couple moments when the dumbness becomes funny or entertaining, such as when one of the baddies inexplicably hires a group of surfers to beat up Dirk Longstreet. Normally not known for their violent tendencies, perhaps the choice of paying a gaggle of extra-chill California surfer dudes to assault Longstreet was the wrong move. Longstreet dispatches with them quickly by beating them up extra-stupidly with his surfboard. Oh dear.


Other funny moments occur when fights break with little or no pretext. A lot of these fights have, let's just say, choreography issues. We don't mean to nitpick, because it's probably hard to make a movie like this, but come on. A little more professionalism would have gone a long way.


In between all this, there are many scenes of Longstreet having his own Endless Summer (AKA endless surfing). While that slows things down considerably, the real problem is that Longstreet isn't that likable a character, at least for 90 percent-plus of the movie. He's kind of a jerk to Cherrie for no reason that we can see. Having likable characters is key, and The Circuit III does not deliver them. Avedon and Merhi don't add much to the mix, and James Lew doesn't say anything. This ship is sinking fast.


The many scenes at The Playpen strip club got us thinking. If men go to strip clubs to see naked women, would they be happy or disappointed to see a bunch of half-naked men grappling with each other? Would this be a net benefit for the strip club patron, or an unpleasant surprise? Nevertheless, all the fights at this one location, with its particularly annoying announcer, got repetitive fast. It's all very reminiscent, unfortunately, of Las Vegas Warrior (2002). That's probably the film that's the closest comparison to Circuit III.


While the film opens up with a truly impressive location, the top of some sort of mountain, the scenes that take place up there are face-palmingly dumb. Longstreet is at the top of the mountain wearing a Karate gi, and guys just show up there and begin fighting him in a very silly manner. It goes on for a while.


While The Circuit III was never released in America - and it is unfair that Merhi would foist this muck on the rest of the world - it can now be seen on Merhi's YouTube channel. While it all caps off with a catchy song, performed live by Cristina Rose, perhaps the best thing about the whole experience is its end credits. It's so filled with spelling and other errors, it's more entertaining than the movie itself.


However, we would only recommend this to those who have seen the other two Circuit films and are Circuit completists and need to see it out of some kind of OCD-like compulsion. Assuming you don't have this kind of medical issue, we can safely say to skip this one.

Comeuppance Review by: Brett and Ty
Also check out a review from our buddy, DTVC!