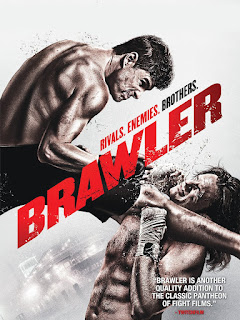 Charlie Fontaine (Grubbs) and Bobby Fontaine (Senter) are brothers who, in their spare time, enter into Punchfighting matches on New Orleans riverboats. The mob is involved in the form of Atwater (Rhodes), but Charlie has a high-quality trainer in the form of Rex Baker (Bowen). When Charlie catches Bobby engaging in "the ultimate betrayal" (to quote the back of the DVD box) with his wife Kat (James), it's clear that the only way to resolve this dispute is in the Punchfighting ring. So, eventually, the two brothers square off against each other. Who will be the ultimate BRAWLER?


Hey, look! It's another Punchfighter! Beloved reader, you can rest assured that as long as they keep making movies with shirtless men punching each other, we here at Comeuppance reviews will continue to watch them and review them. Curiously, filmmakers out there don't seem to realize that this sort of thing has been done before. A lot.


Brawler was writer/director Chris Sivertson's follow-up to his I Know Who Killed Me (2007), the Lindsay Lohan epic that seems to have been much maligned but is actually fairly entertaining. In that film, there are many, many stupid moments but they somehow add to the overall watchability factor. In Brawler, just the stupid remains. He seems to be going for drama and atmosphere over anything else - and that includes scenes of fighting. There are surprisingly few brawls in Brawler.


In I Know Who Killed Me, there are many colorful lighting schemes and some flashy editing to keep the viewer's eye glued to the screen. In Brawler, they forgot to turn on the lights at all. Yes, it's one of those. There are many scenes with low - or seemingly no - lights. Filmmakers should know that not turning on the lights doesn't help the viewer like your movie. It actually annoys us.


There are long sections with no fighting, and the movie takes itself way too seriously. Even with all the endless dialogue scenes, somehow the writers of Brawler forgot to include an antagonist. Something every story should have, especially a Punchfighter. There's no Brakus, Tong Po, or some such memorable villain that our heroes must face off against and work up towards.


The character of Bobby is very Zac Efron-like. In other words, a prissy millennial. He doesn't seem like your typical tough guy. The best character in the movie was Rex, played by Michael Bowen. Much like Sly Stallone in his TV show The Contender, he's a fight trainer who wears a fedora. Considering Brawler's limited resources, their best move would have been to increase the role of Rex if they wanted to improve things.
What would have been even better is if they had gotten one more character actor in there, perhaps someone for Bowen to play off of - someone like Lou Ferrigno, Christopher Lambert, Nick Mancuso, Vincent Spano - anybody! But no, it's just a bunch of fumbling around in the dark. Literally.


There's a scene early on where a group of frat bros comes to assault Bobby and he has to beat them all up. This shouldn't have been one scene - it should have been the basis for the plot. Brawler should have been: An evil fighter (the Brakus character) commands an army of frat bros. He has a secret lair and the bros do his bidding, whatever that may be. The baddie wants to take over the town so he sends the bros to trash businesses and cause mayhem.
The Fontaine brothers must fight through wave after wave of frat bros with backwards or sideways baseball caps until they make it to the final battle - the toughest battle of their lives - with the evil baddie. Now is that so freakin' hard? Rather than tease us with that one scene, that's what Brawler should have been in its entirety.


Probably the best example of a fight film that's more of a drama is Scorpion (2007). Probably the weakest is The Fight (2001). Brawler leans more to the latter. Thank the lord it's only 84 minutes. You can find it at your local Dollar Tree or other dollar store, as we did, but the real question is, would you want to?
Comeuppance Review by: Brett and Ty
Posted by Ty at 29.12.22