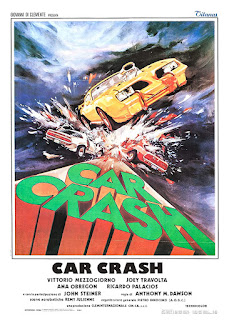 Paul Little (Travolta) is a stock car racer, and his best buddy Nick (Mezzogiorno) is his mechanic. The two men live to race, and they don't cheat, which really hacks off mobster Eli Wronsky (Palacios) who didn't want them to win a rigged race. After drawing the ire of the gangsters, Paul and Nick travel to Acapulco so they can be part of a new race called 'The Imperial Crash'. Along their journey they meet Janice Johnson (Obregon), an antiques dealer, and sparks fly between her and Paul. When the three of them go to the mansion of the wealthy Kirby (Steiner) and his snooty butler Gershwin, more chaos ensues before they can get to the final race. But Kirby's friendship will prove invaluable later on. Will the gangster baddies rub out Paul and Nick before they can even get to The Imperial Crash? Or, while they're in sunny Mexico, will there be - to quote Atomic Swing - a CAR CRASH in the blue? Find out today!

Antonio Margheriti has always been among our favorite directors, and Car Crash seems to be one of his lesser-seen works. Despite the cult status of Margheriti, the presence of Joey Travolta, and the fact that it was a Italian-Spanish-Mexican co-production which ensured a worldwide release, it appears as though the only way to see it in the U.S. is the Sony VHS.

While there are some scenes of light shooting and beat-ups, there are plenty of blow-ups and, of course, car races and crashes. Over almost 100 minutes, the film does slow down at times, but the camaraderie between Paul and Nick is good, and some drama is needed because it can't be all cars all the time.

One of the best things about Car Crash is the music by Mario and Giosy Capuano. It's really tremendous stuff and it helps keep the movie afloat. It ranges from hard-driving rock to synth to folk cues, and it's a treat for the ears. They were an interesting choice to provide the music, because it appears that this is their one and only soundtrack. It should come out on CD or vinyl, stat. I would say reissued, but it appears it has never been issued in the first place, which is a shame. I think a lot of people would buy it. It would be perfect for a company like Digitmovies.

Of course, it was 1981, and one of the first scenes takes place in an arcade with plenty of pinball machines and stand-up games. But, moving on from that highlight, much has been made of Margheriti's use of miniatures during some of the racing scenes. Far from a negative, it comes off as delightfully charming as far as we're concerned. If they had called the movie "Hot Wheels" it would have been entirely appropriate. Of course, Margheriti used plenty of "fast motion" to give the feeling of more speed, which gives things an old-timey "Keystone Kops" feeling which may or may not have been intentional.

John Steiner does an atypical role as the foppish Kirby, and his butler Gershwin is annoying so it's great when Nick finally punches him in the face. Nick also has some great insults, calling people "Jerk Brain", also, and we quote, "Your mother eats moose meat!" Obviously Nick was quite ahead of his time, as these two insults together were clearly the precursor to Judd Nelson in Conflict of Interest (1993) and his immortal "Jerk Beef".

Naturally, it all comes to a head at The Imperial Crash, which seems like it would be a good band name. Car Crash is decently entertaining most of the time, and would have been perfect for the waning days of drive-in theaters. Hopefully it'll get a physical release in a digital format so more people can see it and re-evaluate it, or just evaluate it for the first time.
Comeuppance Review by: Brett and Ty
Posted by Ty at 22.12.22