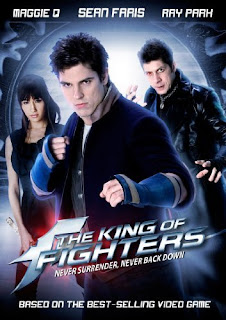 
An evil baddie named Rugal (Park) wants to stay on top as the KING OF FIGHTERS. He has his own special dimension of existence where he can fight whoever joins him there using a Bluetooth earpiece. Certain relics are needed to help defeat Arugula or whatever his name is, so that’s where Mai Shiranui (Q) and Kyo Kusunagi (Faris) come in, because naturally Kyo has “the Kusunagi Sword” or some such thing. Iori Yagami (Lee) also is an opponent of Rugelach and Terry Bogard, a non-fighter, wants to know what the heck is going on. Vice (Liu) and Mature (Ganderton) are also fighters in the tournament. Will anyone be dexterous enough to beat Rugtime?


It must be an interesting challenge to turn a fighting video game into a 93-minute movie. Obviously you can’t have opponents fighting each other for the entire running time, so you have to fill the spaces in between the fight scenes with something. While, in The King of Fighters’s case, it took three people to accomplish this task, still the outcome fails to engage the viewer.

It’s all pretty slickly done in the visual sense, but there’s no emotional or intellectual aspects to lock on to. The end result is like watching someone else play a video game. And we all know how much fun that is. With King of Fighters, we don’t even get the pleasure of moving our thumbs around a plastic controller. It’s a video game that someone else is playing for you, and you can’t even press X to skip the cut scenes. That’s what the plot consists of.

The target audience for this movie seems to be obese middle-schoolers or otherwise very undemanding people that enjoy Mountain Dew and Cheetos as their main source of sustenance. 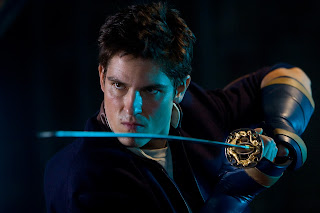 Sean Faris was an odd choice to play the Japanese Kyo Kusunagi. Mainly because he’s Sean Faris. He’s a himbo of the highest (or perhaps lowest) order. He seems like he’d be much more at home on the CW, delivering highly melodramatic dialogue about turbulent teenage relationships. Ray Park is no stranger to video game-related projects, including having been in Mortal Kombat: Annihilation (1997), which looks like a masterpiece compared to the brainless and taxing King of Fighters. If Gary Daniels or Scott Adkins played this part, it still wouldn’t have saved the movie, so perhaps it was better that it was Ray Park.

So while some scenes are somewhat stylish, it seems like the aforementioned Mortal Kombat: Annihilation might be enough for any sane viewer. That’s kind of the last word on movies like this – in other words, a bunch of people flying around in video game style while techno music plays on the soundtrack. And there is a ball of CGI snakes in there for good measure.

Featuring the end credits song “Go Fly” by Yoshitaki Iwai, King of Fighters is not recommended viewing, unless, for some reason, you’re trying to watch every video game movie out there. If so, you’re on your own there, buddy.
Comeuppance Review by: Brett and Ty
Also check out a write-up from our buddy, The Video Vacuum!
Posted by Ty at 15.12.22

With Twitch watching people play video games actually is pretty fun though, I rented this from Family Video when it came out and had a pretty good time.