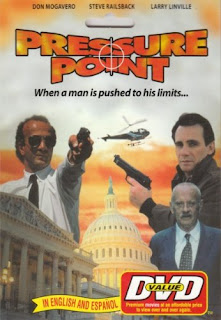 Sebastian Dellacourt (Mogavero) is a CIA agent that might be on the edge, but it’s kind of hard to tell. After accepting the time-honored “one last job” from his handler Neil Kennedy (Linville), he flies off to Chile to assassinate an ambassador or some such thing. After the job goes awry, Dellacourt, or “Della” as Kennedy refers to him as (maybe it’s not the most masculine nickname in the world, especially if there’s a subconscious comparison to Della Reese) is sent to prison. His terms for getting out: accept “one last job”. Again. Another one last job.

So Dellacourt travels from Wilmington, Delaware to the rural burg of Crittenden, Vermont, in the hopes of taking down a rogue militia masquerading behind a construction company. The head of said militia is the rather droll Arno Taylor (Railsback). While in Crittenden, Dellacourt runs afoul of the local good ole boys and local police officer Samantha Cole (Ljoka) comes to save his bacon. Naturally, sparks fly between them, especially when Sebastian Dellacourt gives his name as “Del Sebastian”. The clever Cole quickly finds him in the crime computers, but the two have to team up to stop Taylor from blowing up a congressional office building in Washington, D.C. Will they do it? Or have the baddies finally found Dellacourt’s PRESSURE POINT?


Pressure Point is from the same people that brought us Radical Jack (2000), and the main claim to fame of both films is that MST3K has mocked and ridiculed them. While Pressure Point may be low budget, and may be a mélange of both silly and face-slappingly stupid in the style that only a DTV movie of this sort can be, at least it got into video stores. There are some genuinely funny moments that were probably unintentional. The main problem, besides the obvious, is that it’s too long. This should not have been 98 minutes. The pacing is well and truly off, because for every “laff” moment, there’s a long stretch where things feel like a chore. The payoff is not exactly equal.

There are some classic clichés on display, such as Linville calling Mogavero “The Best”, and also his utterance of “No More Mistakes”. Movie highlights include the thrilling (?) prison escape and the infamous “dynamite in the microwave” scene. Railsback’s complete character development consists of the fact that he likes apples. His speech about America was pretty sweet, though.

Sebastian Dellacourt also has an inexplicably hot wife named Karen (Gentile), and a nine-year-old daughter named Emma (Reilly). Emma has a stuffed bear named Mr. Paws. Surprisingly, Mr. Paws plays a pretty integral role in the plot. In terms of importance, Mr. Paws’s billing should have been above Don Mogavero.

Mogavero is, let’s just say, an unlikely action star. Typically, they aren’t affectless middle-aged men with thinning hair. It was an interesting choice putting him front and center. There are other side characters worth mentioning, whether it be the annoying Walt (Keppel), or “The Prosecutor” (that’s all she’s billed as), played by Alex Datcher of Passenger 57 and Rage and Honor (both 1992) fame.

Pressure point is like a less-competent Malone (1987). There are also elements of Militia (2000) and Deadly Reckoning (1998) as well (the latter mainly because of the stuffed bear factor). Of course, the specter of Radical Jack is ever-present. Just like in real life.

So, if you’re ready for your brain cells to take a serious beating, enter the singular world of Don Mogavero and Pressure Point. But don’t say we didn’t warn you.

We always love a good Malone fun fact! Thanks!