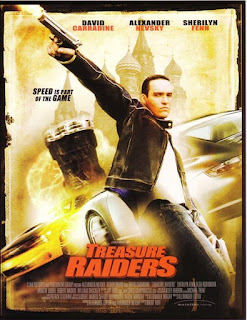 
After an intro featuring some Knights Templar and an explanation of the Templar treasure, we're soon introduced to hip, hot, n' happening history professor Michael Nazzaro (Brand). Brand fancies himself an amateur archaeologist on the side, and he funds his expeditions by competing in illegal street races. Makes sense so far. On the racing circuit, he meets a colorful character named Sergei "Wolf" Volkanov (Nevsky). He's a hulking brute, but he's charming, so everybody likes him.


After being introduced to Wolf and his wife Lena (Fenn), the two men decide to go all in together to find the Templar treasure. Meanwhile, the mysterious Pierre Samonon (Carradine) enters Nazzaro's life and wants to know what he's up to. During all this, the police are keeping tabs on Wolf's activities. They think he's involved in drugs, even though he's actually finding Moscow's drugs and dumping them and asking for no credit. Cronin (Divoff) wants answers. As if all that wasn't enough, there's intrigue involving a man named Beekeeper (Jason Newsted lookalike Shockley) and Dr. Pablo Ramirez (Madrid). Will Wolf and Nazzaro live to race/find treasure another day? 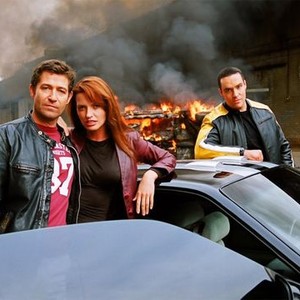 Treasure Raiders is a rather unexpected cross between National Treasure: Book of Secrets (2007) and The Fast and the Furious (2001), served up with an Alexander Nevsky twist. Who would concoct such a thing? That would be Nevsky, of course. They should have called the movie Treasure Racers. We think that makes sense. It's more like the National Treasure sequel because both deal with Templar treasure, but interestingly they both came out the same year. Its closer DTV relatives could be said to be The Minion (1998) or The Order (2001).


We thought, based on the name 'Treasure Raiders', that it would be people poking around the jungle for 90 minutes, looking for one of those old-timey treasure boxes. That's not what this is at all. Treasure Raiders features more illegal street racing than the title would imply. Not to mention Nevsky drinking vodka and flexing.


Treasure Raiders actually seems to get better as it goes along, culminating in the scene where Nevsky is shooting two pistols sideways with his arms outstretched in opposite directions. Nevsky's line readings alone are enough to keep the whole thing afloat, in our opinion. His low-pitched, flat, 'if-Schwarzenegger-can-do-it-than-why-can't-I' deliveries are very enjoyable to listen to.


He's definitely in the spotlight here, which leaves little scraps on the table for good gets like Sherilyn Fenn and David Carradine. Fenn especially is frustratingly underused. To get someone of her caliber for a nothing role like this was a shame. Her main job was to fawn over Nevsky. Oh well. She doesn't have to feel bad, as Carradine and Divoff don't do very much either.


Further highlights include a baddie shooting a machine gun, ironically wearing a Choose Life jacket (Wham! must be huge in Russia still), the time-honored Barfight, and a guy trying to shield himself from an explosion using a pizza box.


In the end, Treasure Raiders isn't exactly a masterpiece of cinema (did you expect it to be?) - but it's a pretty good example of DTV bein' DTV in 2007. Take a little bit from this column, a little from that one, and see what shakes out. It's mostly entertaining, if quite silly. You could do a lot worse.