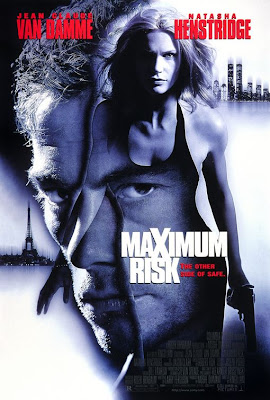 Alain Moreau (Van Damme) is a French cop who just discovered he has a twin brother. His name was Mikhail Suverov and he worked for the Russian mob. To get to the truth about his life, he travels to New York City, specifically the Little Odessa area. While there he must fight gangsters, as well as double-dealing FBI agents. But just about everyone thinks he’s Mikhail. Luckily his brother’s girlfriend Alex (Henstridge) is along for the ride. Now Alain has to make it back to France in one piece, but not before causing some major Van Damage in the big apple!

Maximum Risk is from the good old days when Van Damme movies went to the theater. Thus, it has a high-quality look and feel, and seems to have a decent budget behind it. It’s nice to see the high production values used well by the great Ringo Lam, who would later team up with Van Damme again for Replicant (2001) and  In Hell (2003). 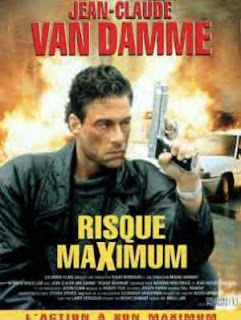 It must be in Van Damme’s contract to be in movies where he plays two roles. Most actors never get this chance, but Van Damme has. FIVE times. These being Double Impact (1991), Maximum Risk (1996), Replicant (2001), Timecop (1994) and The Order (2001). Just why he feels there aren’t enough Van Dammes currently on earth, outside of ego, has yet to be explained. To further emphasize his “double” life, here, in Maximum Risk, Van Damme seeing his reflection is a theme throughout the movie. Glasses, windows, picture frames, and of course mirrors are all employed for psychological purposes. But really this movie is an entertaining thriller that is palatable for general audiences. You don’t have to be a Van Damme or martial arts freak to enjoy Maximum Risk. 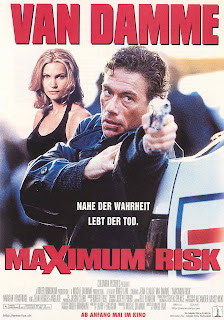 Say what you will about him, but Van Damme has more emotion than Chuck Norris. Or Don "The Dragon" Wilson. Speaking of Wilson, just as his Bloodfist movies are all 80 minutes, it seems another contract demand of Van Damme is that his movies be at least 100 minutes. Maximum Risk is no exception, so naturally there’s some filler, but not much. And a classic cliche is on display: the “wacky taxi driver” is on show once again, but at least this time he has a more substantial part to play than usual.

Following another JCVD rule, there has to be a scene where he gets nude or semi-nude. Why, we don’t know. Here it’s the time-honored bathhouse fight, also seen in such movies as Red Heat (1988) and Showdown in Little Tokyo (1991). But at least there’s some Natasha Henstridge nudity as well to right the ship. Henstridge, in only her second-ever movie role (after Species, 1995), looks great, and it’s sad to see her end up in Scott Wiper crud like A Better Way to Die (2000), but hey, you gotta make a living. 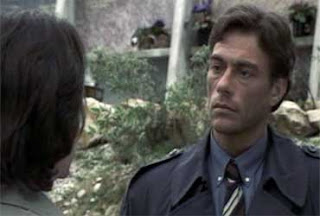 Maximum Risk is solid, undemanding entertainment seemingly made to make the careers of Van Damme and Ringo Lam go over well with larger audiences. Watching it today, it’s classic 90’s fun that’s easy to like.

I haven't seen this one in years-- other than when it was on TV recently and I caught some of it-- so I'll have to check it out again. I agree too that, good or bad, these Van Damme theatrical flicks were definite A-list action, and the production values are proof of that.

Damn, I have this but haven't seen it! I thought I had seen all Van Damme but this sits on the shelf unwatched. Looks like it's solid entertainment.

I'm glad you mentioned the twin thing. I was wondering how many times he's been in a movie with multiple van-dammes. Sadly, this is where I sort of lost interest in his career. Haven't seen much of his stuff beyond Timecop. May give this one a go though.

DTVC: These Van Damme are always on the Spanish channel! They should appear more on English-speaking TV.

Explosive Action: It is quality Van Damme. A far cry from crud like Derailed.

MarkusWelby1: It's worth watching on rainy day. Out of the 5 (!) movies when he plays a double Van Damme, this is probably the 3rd best. (After Timecop and Double Impact).

I personally LOVED A Better Way To Die, in fact it was one of my faovrite DTV films. Loved Maximum Risk as well, i'd love to see Van DAmme play twins again.

Something about Scott Wiper just annoyed us. But everybody else was decent. Lou Diamond Phillips is always entertaining.

For some reason, I really liked the poster for this one (the first image) when it came out.

Eh, I thought Wiper was an OK actor, but he's definitely better at directing. The Condemned was also a pretty fun film.

This one didn't work for me. I can't remember why. Haven't seen it since opening day in the theater. I think the fact that they introduced the twin thing and did next to nothing with it cheesed me off.

Dr. Blacksteed: Same here, thought it was pretty cool at the time!

Venom: Totally agree. The Condemned was a lot of fun. He should make another action flick with Stone Cold.

Videovacuum: Good point. They should have played up the twin idea more.