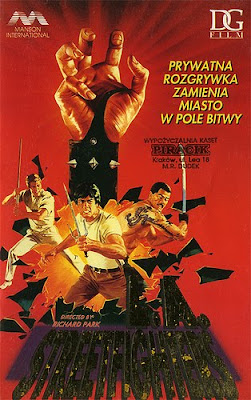 L.A. Streetfighters is a ridiculous piece of hokum that any fan of video-store action should be familiar with.


The plot, such as it is, involves two 30-year-old high school students named Young and Tony. They get mixed up with gangs who only fight with sticks and the mob. Tony is trying to live a decent life and go to random toga parties, but is pulled into the criminal underworld. Tony and Young fight a gang named "The Spikes". They consist of 4 drunken frat guys. The leader has a blond bowl haircut and is wearing a half-shirt. The Spikes have their own chant: "Spike Them...Kill. Spike Them...Kill." This gang is no laughing matter. Also there is a Latino gang that chants "Chino Chino Chino". One day Tony, who only wears a gray sweater with his favorite shape, triangles, goes into a liquor store. Not only does he see a random gang playing a wooden flute, Tony pays for his $3.00 beer with a hundred dollar bill.


Let's not forget the mob is after Tony and Young and they hire their best hitman the so-called "Kruger from New York." Not to be confused with the Kroog-Warrior of Dangerously Close fame.


Technical Info: The movie has horrendous dubbing and words like "security" sound "scaredy" The dialogue that is being dubbed is highly hilarious and features such lines as: "You Stupid.", "Listen Chinos!", "Fat Chink equals Big Chump". (Remember we didn't write that!) and "See you later, Good friend." 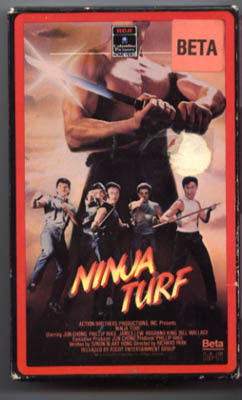 In the final battle, pitchforks as well as sticks are used. So not only is this a "stick-fighting" flick, we stumbled upon a new genre entirely: "Fork-fighting".


The fight choreography is okay, but lacks fluidity. The highlight is when Young chops off a man's arm with a stick. In the end, the main reason to watch L.A. Streetfighters is the sheer silliness of it all.


Note: L.A. Streetfighters was re-titled "Ninja Turf" to coincide with the 80's ninja boom. There are no ninjas in the movie. For more on "Ninja Boom" movies please see the reviews for Ninja Enforcer and Ninja Assassins.