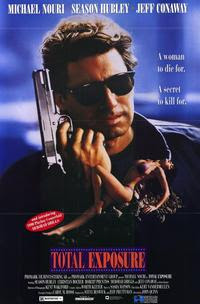 
Andi (Hubley) is a fashion photographer who comes home from a photo shoot in Mexico and the following things happen:

1.She finds a stash of cocaine in her camera case
2. She dumps perfectly good cocaine down the drain
3. She has a fight with Kathy, one of the models
4. Kathy gets shot and killed by a mysterious assailant
5. Andi is blamed for the murder
6. She teams up with private detective\ex-cop Dave Murphy (Nouri) to find out the truth behind who framed her and to clear her good name.

Meanwhile, D.A. Peter Keynes (Conaway) is embroiled in a blackmail scheme. He is an anti-porn crusader who is cheating on his wife and guess who is takin’ the pix?

Total Exposure is one of those “Skinemax” Sizzlers, but it has few names in the cast. (The director John Quinn made his career working in this type of material, most notably “Sex Court: The Movie”). Take Jeff Conaway, who had a great year in 1991 with this, and A Time To Die. His role as Keynes presages Elliot Spitzer in his usage of high-class prostitutes and spent the same amount of money: $100,000.

Some other characters of note include Mr. Brown, a fat “Italian” guy, who is head of the modeling agency. He is shirtless most of the time and lives up to every stereotype imaginable.

There is sleazy photographer Arthur who “looks like Liberace” as said by Murphy. There is also a ponytailed baddie chasing Andi around with a gun. Last but not least, Murphy himself, who demonstrates he is the modern-day Fonzie when he and his ex-partner are standing by the candy machine at the police station. Noticing his ex-partner wants a “nutty bar”, he hits the machine and all the candy falls out.

Murphy gets wise to what is going on when he discovers that the dead model kept a diary. It is written in cryptic symbols that resemble hieroglyphics. Why an empty-headed model would take the time, energy and effort to do that is never fully explained. Luckily, Murphy has a friend who knows about astrology and she helps him crack the code.

'Exposure is unnecessarily convoluted and slow-moving. Nouri and Hubley don’t belong in a film just designed for titillation. They can do better. The word “Skinemax” shouldn’t be taken as derogatory, we all love them, but we are just used to seeing one or both of the Tweed sisters . Incidentally, the title is a complete lie as there is no Total Exposure by the models.

Don’t “expose” yourself to this dud tonight.