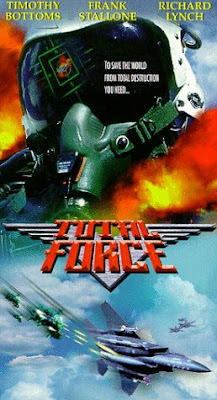 Total Force is a total mess.

The plot, if you can even call it such a thing, involves Dr. Edmund Wellington (Lynch) who has a super hi-tech Military weapon. Drake (Bottoms) is a tough soldier who only wants to drink beer and watch football, when he is not kicking and punching dudes. Frank Stallone joins the fray as Jack O'Hara, the swarthiest Irish gangster ever. O'Hara has his own reasons for pursuing Drake and it all comes to a head at a marina.

Confusing, baffling, amateurish, incoherent, disjointed, irritating, and unexplainable are the nicest things we can say about this cinematic sludge that came directly from the sewer and into your VCR. Even the unannounced and sadly too brief appearance from the great Robert Z'Dar (as "Test Subject", doing his best "Incredible Hulk" impression) can't save this dreck. 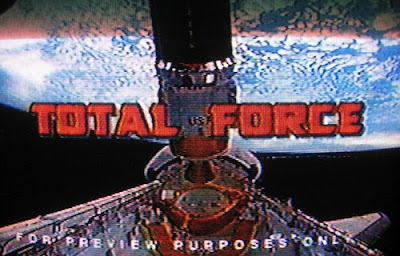 Timothy Bottoms, a dead ringer for George W. Bush, so much so that he was cast as the former prez in the TV Movie D.C. 9\11: Time Of Crisis (2003) AND in the short-lived sitcom "That's My Bush!" phones in his performance as Drake...but then again, wouldn't you? Frank Stallone should stick to his music career if he is going to appear in roles like this.

Of course this is a movie that would be directed by a Sven Nuvo. You got to admit, it’s a great cast, but they are under the shoddy direction of Nuvo, they are under-utilized.

Most people couldn't sit through the whole thing. Total Force is an insult to moviemaking.

Amazingly enough, there is a sequel!: "Absolute Force". I guess the story wasn't complete...and it may never be.


Totally force yourself to watch this tonight!