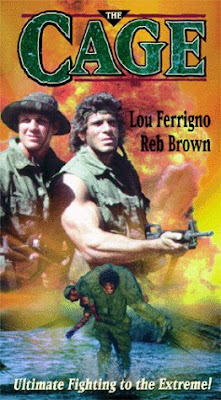 
Cage is an entertaining action pic from the 80’s.

The plot: Billy (Ferrigno) is a ‘Nam vet who tragically gets shot in the head on a mission. He survives but now is mentally challenged. He goes through a lot of grueling physical therapy and eventually becomes a productive member of society. He only has one friend, fellow vet Scott Monroe (Brown). Then slimy gangsters show up. They kidnap and brainwash Billy to go into the dangerous world of cage fighting. Scott must rescue his friend by going into the ring himself. 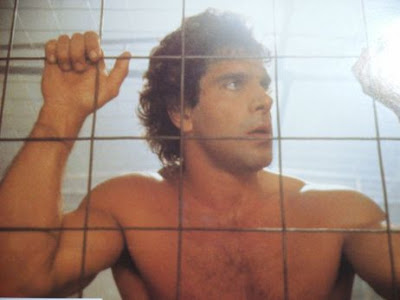 Cage is the only movie that delves deep into the idea of “Retard Strength”. This politically incorrect idea would never be made today. The fight sequences are brutal and predate UFC by decades. Cage was ahead of its time. Another movie of this ilk is called Shootfighter (1992) it stars Bolo Yeung. Lou Ferrigno puts in a sensitive performance as exemplified in his first fight scene when he jovially introduces himself to his mean opponent, with the now-immortal line “Hi!, I’m Billy!” Billy doesn’t want to fight and he is a sweet-natured man. But the gangsters attempt to corrupt him to be a fighting machine. Let’s not forget about Reb Brown and his classic yell. (e.g. Strike Commando (1987) and every movie Brown has been in.) Cage apparently had so many fans clamoring for more “Cagey” goodness a sequel was thankfully released 5 years later!