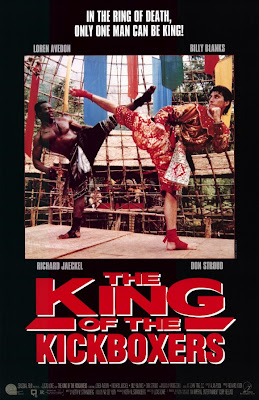 In this Seasonal Films production, the insufferable Loren Avedon plays Jake Donahue, a New York City undercover cop with, you guessed it, a bad attitude, who, you guessed it, plays by his own rules. He is sent by his Captain, O’Day (Jaeckel) who is working with Interpol, to Thailand to bust up a snuff film ring. While there he meets up with his contact in the area, Anderson (Stroud) and mannish love interest Molly (Rose, who must have stretched every acting muscle in her body to pretend she actually was into Avedon). However, it seems Donahue has a history in Thailand, as his brother was murdered there by the mysterious  Khan (Blanks). Coincidentally, the nefarious Khan is the star of these films where the martial arts is so real, you die on impact. The producers of the films recruit young fighters from tournaments, promising them stardom, and when they get to the set, Khan kills them. So, seeing as Donahue is also a kickboxing man, he goes undercover as a naive punchfighter with stars in his eyes so he can get a shot at Khan and get revenge. The only problem is, he’s not as good as Khan, so Prang (Cooke) takes him under his wing and trains him. Will Donahue get the closure he seeks? 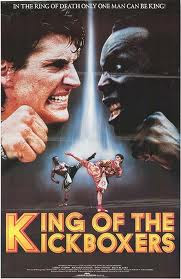 Loren Avedon in this movie is so annoyingly cocky, and so devoid of one ounce of humility, you actually, weirdly enough, like Billy Blanks more as the evil Khan. Sure, Khan is pure malevolence, but he’s secure in his total diabolical-ness and you love him for it. It’s a lot harder to get behind the weaselly Avedon as the main hero.

The plot aside, there is excellent fight choreography and some punishing blows. Fans of fast-paced, well-executed moves will find a lot to appreciate here. Richard Jaeckel plays the classic ‘yelling police captain’ with aplomb, and the husky-voiced Sherrie Rose of Maximum Force (1992) fame is a serviceable love interest who calls Avedon’s character “Jack”. Perhaps she wished he was someone else that badly.

The Pauly Shore-like Cooke does a good job as the trainer of Donahue and has the patience of a saint. His sidekick, a lovable chimp, practically steals the movie. Cooke does have some awesome moves - also check him out in China O’Brien (1990). Billy Blanks is great as the big heavy. His bulging eyes and funny faces are present and accounted for. Jerry Trimble appears in the opening, prerequisite “abandoned warehouse” scene simply as “Drug Dealer”. Han Soo Ong, of Last to Surrender (1999) fame, who plays a local kickboxer, gets one of the best lines of the movie when he tells Donahue “You’ve never faced a real kickboxing”. Loren Avedon, with his jean jacket with fringed sleeves and fanny pack, is simply an unlikable jerk, but he does get some winners in the dialogue department, as well as some memorable yells. This movie overall could have been improved if the audience actually liked the hero. 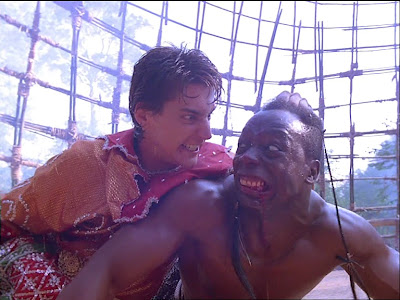 The pure silliness of the whole outing comes to the fore at the final confrontation, when Avedon tops his previous ridiculous casual outfits with a formal getup that can only be described as an “elf jester” suit. When you see it, you’ll know what we mean.

Entertainingly insane, for a punchfighting mini-classic, check out King of the Kickboxers.

Very funny movie. Was marketed in the UK as a NO RETREAT NO SURRENDER spin off.

Yes, i dig his costume as well

That's interesting the U.K. changed it. When Avedon yells noooo and ahhhh when Billy Blanks was on his tv screen, i laughed for a good five minutes.

Great review, guys. King of the Kickboxers is one of my sentimental favorites and one of the better American martial arts films from this era. Holds up fairly well, too.

Keith Cooke kicks absolute ass in limited screen time and I actually found he and Avedon had good comedic chemistry together. Cooke is of course one of the best kickers of all time and he steals pretty much every scene he's in.

This is Blanks' best villain performance though I think most would agree that he's better utilized as the laid back nice guy. His final blow-off with Avedon is terrific.

I'd have to disagree with you a bit on Avedon; I'm a huge fan of his and I think he's one of the few American martial artists who actually shows legitimate personality in his performances. The melodramatic stuff ("Noooo!" / "Ahhhh!") would come off as hilarious with just about anyone. But I think Avedon plays "cocky American" better than most, and I liked that his arrogance erodes over the course of the story. He thinks he knows all but gets humbled before absorbing Prang's training.

You're right though: Rose was annoying by any measure!

I agree. Avedon can be kind of hard to take but it is easy to see how this movie can become a favorite.

This movie is fucken amazing. I've seen it but that was before I reviewed stuff, I really should go back and review it. Billy Blanks is HILARIOUS at the end with all his facial expressions.

Totally agree Sutekh! Blanks was absolutely hilarious. That would be awesome if you reviewed it!

I totally loved this one as well. Blanks was such a great baddie, and I liked Avedon and Cooke's fighting. All around classic.

Definitely agree with you DTVC! Blanks was at his best!

This movie is one of my personal favorites. The US version was cut, however, details on Imdb. I always thought the elf jester costume was an homage to traditional Thai clothing. The Thai invented kickboxing after all. Without kickboxing, no punchfighting, no kickfighting, no cagefighting, etc. What a sad world it would be.

It would be a very depressing world without punchfighting! Haha. That is interesting the U.S. version is cut...unfortunately, that's the version we have.