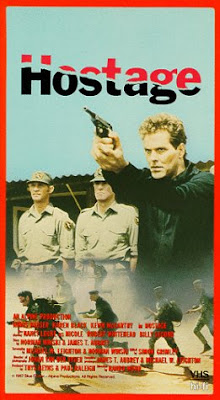 Starting with some AM soft rock, we see a family from New York that has moved somewhere near Nairobi, Africa. Col. Shaw (McCarthy) is an important politician who brought his daughter Nicole and grandson Tommy there.

Meanwhile, actress Laura Lawrence (Black) and her agent are in the same part of Africa. When Tommy experiences some sort of kidney failure, he and a bunch of other characters such as a nun and a bickering old couple board a plane headed back to the U.S.

Unfortunately, the plane is hijacked by the Holy Freedom Party Of Allah, a terrorist group. They land the plane and hold everyone hostage until they get their money and safe release of their leader Zabruto from prison.

But there is one thing this terrorist scum didn't count on: Major Striker (Hauser). This guy is as crazy as the terrorists and his name is as awesome as his black beret. It looks like it's "Vietnam all over again" as the specially trained Striker and his team of real American grunts do whatever it takes to get Tommy and Nicole back and the rest of the passengers to safety.

Before you can quote the ten-year-old Tommy and ask in a high-pitched child's voice, "Where's Striker?", Striker unleashes his fury which includes: climbing a wall for at least 25 minutes, hang-gliding under a helicopter, and being a pioneer in the newly developed fighting art "Grapefruit Weaponry" (you have to see it to believe it).

As for the terrorists, they say the name "Zabruto" a minimum of eleven times. One baddie resembles Tonny Tulleners of Scorpion (1986) fame, which is ironic because Tonny also stopped terrorists on a plane. Hostage is more relevant today than ever. It has middle eastern terrorists hijacking a plane, a character named "Hussein" and Col. Shaw even says the line: "Unfortunately, you can't deny an A-rab a seat on a plane." Because this is now so Un-P.C., it makes for great viewing that shall never be repeated, but sadly may be preventing a much-needed DVD release.

There is an airplane theme throughout the film. The casting of Karen Black recalls Airport 1975 (1974), Her character Laura Lawrence's sister died in a plane crash, and one of Striker's associates is continually throwing paper airplanes.

Hostage is an interesting, albeit silly flick, and the presence of Wings Hauser as Striker livens up any scene he's in. Give Striker a sequel!

This looks pretty amazing. With it only being on VHS, I'll have to keep my eye out for it and see what happens. We haven't had any Wings at the DTVC in a while anyway, which is a travesty considering he's a Hall of Famer.

It's a lot of fun. You can never have enough Wings!