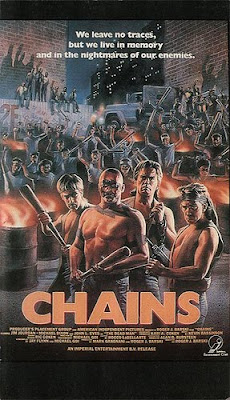 
In the time-honored tradition of ripping off movies such as Straw Dogs (1971), Assault On Precinct 13 (1976), The Warriors (1979), and Enemy Territory (1987) comes Chains, a slow-moving, uninvolving piece of tripe about two rich, spoiled couples, J.J., Paul, Tracy and Michelle, who are from the Chicago 'burbs who get lost on the mean streets of the south side - Chains territory. The couples are so dim, they either drive around in circles or sit in their car NOT DRIVING AWAY.

They team up with Geeter (Jourdan) a streetwise man who is in a rival gang called The Rippers, and is on the run from the Chains. All five of them hole up in (of course) an abandoned warehouse and try to fight off the Chains and each other. For some reason, the posh white couple knows how to make bombs from material just lying around in the warehouse. One of them even says "My college education is paying off!" When The Dead Man (Eves) comes around to exterminate them all, you think all hell would break loose!...actually no...it does not.

The Chains are bit too silly to be tough and scary. There is the Billy Idol guy, The Run DMC guy, The Beardo, and of course Kano. Their graffiti pronounces "Finders Keepers, Losers DIE!" and "Chain Warriors". Just take out the word "Chain". If you're really feeling generous replace it with the word "Kroog". On the bright side, they have a "Chains Chant" which goes: "Chains. Chains. Chains." Much like the Stallone classic F.I.S.T. (1978), gangs (or unions) chant the title repeatedly and excitably. Another great example of gangs chanting can be found in L.A. Streetfighters (1985).

Much like how the Indians used every possible part of the buffalo, the Chains have many uses for their chains. They whip them around menacingly, strike people with them, wear them as belts and for chain wallets. They hang people by them and brand people with them.

Paul and J.J. are extremely annoying and unlikable. All J.J. does is spit snarky comments at everyone while proudly sporting his bolo tie. You actually want the Chains to kill them and that deflates the movie of any sort of tension, drama, or suspense whatsoever. We suspect J.J. really stands for "Jerk. Jerk." Jimi Jourdan as Geeter carries the movie. He does his best, but he can't save this sinking ship.

After a painful 80 minutes, the character of The Dead Man (not to be confused with the Jim Jarmusch film of the same name) appears. He is a last minute character who is far more interesting than the other characters. See also Provoked's Machine Gun Joe, Maximum Breakout's Cowboy, and of course Maximum Force's Bear.

Chains is not exactly a searing portrayal of gang life. It is dumb and slow beyond belief. The box art above makes it look awesome, but alas it is not. Released on VHS on the Imperial label, as was Ron Marchini's epic Karate Cop (1991). So that gives you some idea of what you are getting into.