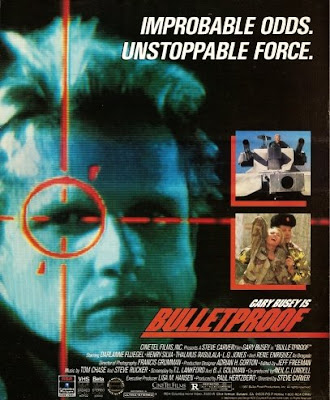 I know it might seem hard to believe, but there once was a time when Gary Busey had a boyish charm and could have been an action star and wasn't known as a crazy guy and late-night comedian punchline. To witness this prime Busey, simply check out "Bulletproof" (not to be confused with the 1996 film where Adam Sandler shoots people).

Busey plays Frank "Bulletproof" McBain, a rogue, but lovable Cop On The Edge, or COTE for short. He's teamed up with the original Blacula himself, Thalmus Rasulala. One of McBain's talents is he is able to withstand being shot, and he saves all the bullets he's been shot with in a jar in his bathroom. Meanwhile, somewhere in Mexico, a terrorist network of "Mexicans, Nicaraguans and A-rabs" are all working in collusion to take over the world using a supertank called the NBT-90 Thunderblast.

The evil Colonel Kartiff (Silva) and General Brogado (Rene Enriquez) are heading up the operation, so Special Ops Military Adviser Sgt. O'Rourke (Jones) and army officer Devon Shepard (Fluegel) go south of the border to investigate. They, along with some of their army buddies and a group of priests and nuns are kidnapped and held hostage by the evildoers. Only one man can save his compatriots (and Devon, his long-lost love)...MCBAIN of course! And did we mention there are also evil Russians McBain has to stop? 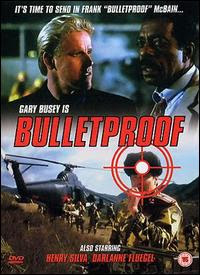 In the 80's, you couldn't be the hero in an action movie and not be wisecracking. Most of Busey's lines are snappy one-liners, such as "what's this Tonka toy?", "I'm a one-man suicide squad!", and he even pioneered his own insult - the immortal "Butthorn". He inexplicably says this word THREE times during the movie. I guess it didn't catch on.

There are some sensitive flashbacks, and Devon even says to him "you may be bulletproof but you're not love proof". The movie on the whole is fun, upbeat and there is plenty of humor. Henry Silva plays an Islamic extremist, and the enemies are "communist-inspired terrorists". I guess it was pretty ahead of its time.

Surely this was one of the only times Fred Olen Ray (who wrote the story) got a movie released by a major studio. What would the world be like today if all his movies were? 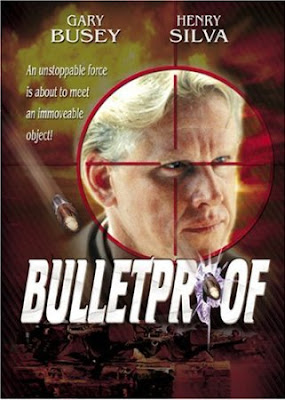 A movie highlight is when Busey is tied to a big circular thing that looks like a huge cheese wheel. Watch out for this scene. So if you want to see a movie where Gary Busey is a lovable supercop and ladies man, and before he was crazy (well, really crazy) in a movie with plenty of heart, sax solos and blow-ups, and a mixed bag of world villains, this is the movie for you.

This movie looks like my worst Gary Busey nightmare. However that might be because I'm just a butt horn. Nice review!

Haha! Love the butthorn line! also thanks for the kind words and your comment.

Man, I was so disappointed, because that opening scene was so fantastic, and though there were a few other decent scenes, overall it didn't live up to that opening awesomeness. Butthorns!

Love all the Butthorn lines! Thought the movie was decent. Without Busey, this would have been a tough sit.

A great review of a great movie. I love the ending where the tank is driven back from Mexico to the US, and the border guards are too stunned to do anything. Recommended for all action fans, except for butthorns.

Thanks once more! Totally agree, Butthorns don't understand this movie. Gary Busey was great in this. Should have made a sequel.

Who is the best McBain, Gary Busey (bulletproof) or Christopher Walken (McBain 1991)? I will have to watch both. Always wanted to see Walken's movie but a Busey one? I am in because i dont want to be labeled as a butthorn!

Busey is the better McBain. Walken could probably pull off calling someone a butthorn too. Haha.

Additional proof positive of what a great action hero Busey could have been is Eye Of The Tiger (1986) - 2 years prior. Yes, the title is horrible, based on the 4 year old theme song from Rocky III and the film seems a bit derivative of White Lightning, Walking Tall, and Mad Max.

Nevertheless, it's a kick-ass actioner with Yaphet Kotto as his only ally against the redneck sheriff and William Smith as leader of the nihilistic biker gang, this film deserved to be big. C'mon everybody, remember watching Busey's incredible performance in The Buddy Holly Story?

Eye Of The Tiger was pretty good. Saw it years ago. Gary Busey usually delivers the goods. Buddy Holly Story was a great movie.