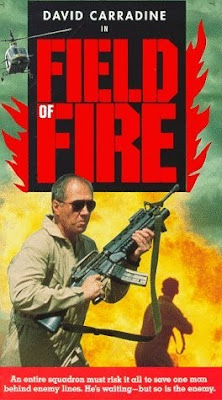 It seems our friend (at least he seems like our friend after spending this much time with him) Cirio H. Santiago can't leave the jungles of Vietnam. So many of his movies are romps in the jungle. Here we go again.

When Wilson (Jim Moss) AKA Ironhand, is stranded in the dense jungles of 'Nam, General Simmons (Carradine) (NOT "General Corman" as he is listed in some sources...remember Counter Measures (1999) and "Zach Silver"?) and his aide Willy send in yet another elite team to rescue the lost and nervous soldier. Meanwhile, the VC is closing in and they lose their radio communication. They have to get to the Laos border to a special meet point. Will they make it?

Unfortunately, Field of Fire AKA Battle Gear retreads a lot of the same ground we've seen before. It's not BAD per se, but it's pretty mediocre. For most of the movie, Carradine barks orders in one room. He does leave that room eventually, and it's a great moment. He also wears a funny Hawaiian shirt. Interesting.

There's also a lot of Vietnam slang. Characters mainly talk about LURPS and their Sandy's while Jolly Greens chase their Ironhand. I know, I'm confused too.

The leader of the jungle group is Duncan (Lottimer), or "Dunc" for short. I believe he was cast because he resembles Bruce Springsteen. Plus he has an interesting name. Then there's Jefe, a token man who speaks Spanish. He uses his language to confuse the enemy. Senator is played by Scott Utley. It's not one of the better 'Nam handles we've heard. Jimmy T is Don Barnes, the African-American who yells loudly while shooting his machine gun. Hawk is Henry Strzalkowski (a man who has been in a lot of DTV action movies but isn't a prominent name). Captain Phat (Avellana) is the evil baddie. Avellana also has a long and storied history as an actor/director in the DTV world.

Also, when the VC talks, there are WAY too many subtitles on the screen. We're pretty sure they're not saying all that stuff. Someone grunts and there's a paragraph.

You'd think a movie with this pedigree would be better. Field of Fire is generic Vietnam stuff with all the standard moments and no surprises and nothing memorable.

You could do worse, but this is pretty bland. For better Cirio, check out Final Mission (1984) or The Devastator (1985).