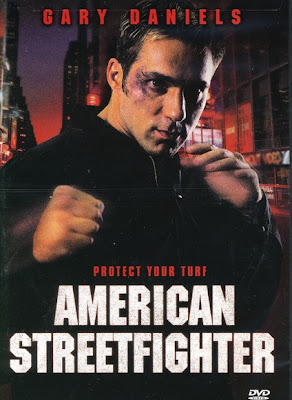 
Jake Tanner (Daniels) is just a guy with silly long hair who runs into tragedy when he and his friend Ito's (Roger Yuan) plan to blow up a jukebox (?????) goes horribly wrong.

Ten years later, Tanner is a high-powered businessman in Hong Kong and has gotten a haircut. He receives word from America that his estranged brother Randy (Jacklin) is now an underground boxfighter (like punchfighting but in a warehouse of boxes...there may also be some boxing involved). This upsets Tanner, who is also a Karate master. He comes home and tells Randy not to sign a fight contract with the evil Ogawa (Okamura). Randy disobeys, but Tanner agrees to fight in underground matches in Randy's place. He takes on the baddies while reconnecting with lost love Rose (Dali) and her ten year old son Billy. Of course his name is Billy. When Tanner is injured when Viper (Dennis Reese) fights dirty, he must recuperate and re-train. With the help of the plucky Billy, who he forges a sweet relationship with, he comes back stronger than ever for the final showdown with Ogawa.

The most important thing to mention about American Streetfighter is that Gary Daniels single-handedly carries the film. Without his charm and fighting skills, this movie would be nothing. I.e., it would be Expert Weapon. It's by the same director and also has Ian Jacklin. It even has the same scene: a motorcycle breaking through a wall and going around in circles. Director Austin must think that is the most awesome stunt ever. The baby-faced Jacklin has zero acting ability, but that makes it all the more fun to watch. Every word he says just sounds wrong somehow. Ian Jacklin makes Asher Brauner look like Andy Bauman. His silly fighting pants have more personality than he does. While this movie does share the cheap, shoddy, low-budget quality of Expert Weapon (1993), thankfully this movie features Daniels, which saves it. 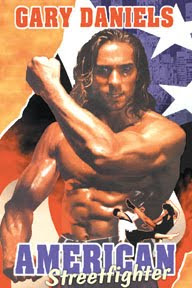 You may be wondering why, if the film stars Gary Daniels, it is called AMERICAN Streetfighter. There is a good explanation for it, but you have to watch the movie. However, he gets a great quote with "I like the sound of breaking bones!" Billy, the squeaky-voiced ten year old is obsessed with Teenage Mutant Ninja Turtles (which were very popular in 1992, don't forget). He even says to Jake Tanner, "You're no ninja turtle!" The fight announcer looks exactly like Ryan Seacrest. Maybe it is him. He has a lot of jobs.

Okamura is great, but incoherent, as the main bad guy. His bellowing "Noooooo!" is one of the best we've heard.

Sure there is flat acting, dingy film quality, and the punches don't always connect, but the presence of Daniels rises above it all. With just a LITTLE more professionalism, American Streetfighter could have been better, even rising to more prominence in people's minds. As it stands today, it is a film for Daniels fans and has very little else to recommend it.