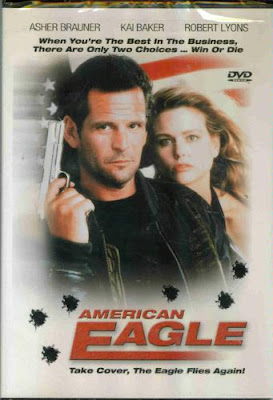 "When You're The Best In The Business, There Are Only Two Choices...Win Or Die."

Max "The Eagle" Shane (Brauner) is a surly mercenary with a mullet. He goes around the world to hellholes like Angola and Nicaragua cleaning up problems - with bullets. He's a Vietnam vet, and his fellow Vietnam buddy Johnny Burke (Wells) is now a high-powered bad guy who runs drugs, guns ("war is a very profitable business") and is involved in kidnapping. He also hates Shane because of an incident that occurred back in 'Nam. So Burke kidnaps Rudy's sister Angela (Baker) and a bunch of other fashion models, and Shane goes on a mission with his friend Rudy (Lyons) to the Ivory Coast in Africa to stop the bad guys and end the conspiracy.

Asher Brauner makes quite the hero. All he does is smoke, drink and eat meat. He even asks Rudy at one point "Got any bacon?" This proves to be his catch phrase. It truly rivals "I'll be back". He loves sports and wears plenty of jerseys and caps. Interestingly, he seems a bit confused a lot of the time and says plenty of malapropisms. When someone says "news travels fast", instead of saying "what news?" (he's trying to get info), he says "how fast?" And when another character is dead silent, saying nothing, Shane says "I'll be the judge of that". Huh?

He makes a lot of funny faces and has a cool jacket. He looks like a cross between Nick Nolte, Stallone, Michael Madsen and David Hasselhoff. He gets into a grenade/knife fight. By that I mean he holds a grenade and his enemy holds a knife and they fight. We've never seen that before, I don't think. Pretty original.

Shane's partner Rudy basically IS Bob Eubanks. He looks so much like him. He and Shane are the original odd couple, as Eubanks, I mean Rudy is a health nut that exercises and drinks power-shakes made of fruit. But they work well together as they discuss sports as they torture a bad guy for information. If you've ever wanted to see Bob Eubanks shoot a machine gun and kill people, this is the movie for you. Notably, there are some pop culture references and even waterboarding in American Eagle. How ahead of its time. Asher is a visionary I tell you.

Normally we don't go into nerdy stuff like this, but you have to watch out for something really funny at an hour and seven minutes into the movie. There is the single most OBVIOUS dummy you've ever seen. It's laugh out loud funny. It's like something from a sketch on Conan.

SPECIAL NOTE: The back of the DVD from Platinum disc is hilariously over the top and also riddled with errors. Firstly, the pictures shown are NOT from this movie, but the other Asher movie on Platinum, Merchants of War (1990). According to the person who wrote the back, "Asher Brauner wrote the BONE CHILLING screenplay". Also they misspell Spielberg as "Speilberg" and they even made up their own word: "Wearly"! And I quote (I couldn't make this up if I tried):

"The action avalanches from spectacular car crashes to fiery shootouts as Max, the wearly Eagle, must sharpen his talons anew for the most brutal fight of his life. Nothing has prepared you for the awesome impact of this adventure classic's explosive climax."

Are they overstating the case? Find out for yourself tonight!

I know I'm 2 years late here, but another good review. This one's a favorite of mine as well. I have it on VHS as well as DVD.

You should look into reviewing Enemy Unseen (1989), another Triax production which also stars Vernon Wells.

No problem, we appreciate the comment...we always wanted to see Enemy Unseen...it is on our list.

Happy you liked the movie too.