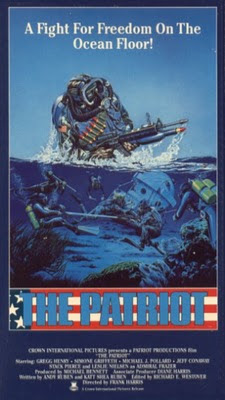 "A Fight For Freedom On The Ocean Floor!"

When smugglers sneak into a nuclear storage facility and steal some nukes, only one man can stop them: ex-Navy SEAL and Vietnam vet Lieutenant Matt Ryder (Henry). Back in 'Nam he was known as "The Patriot". He assembles a team to help him, which includes Howard (Pollard) and Kenwood (Mike Gomez). The top Brass, Admiral Frazer (Nielsen) and Commander Mitchell (Conaway) oversee Ryder, who is one bad dude with an attitude. He wears his shades and rides his Harley to bars and picks up chicks. Will Ryder be able to stop the smugglers?

Somehow this movie manages to fill up 90 minutes with not very much happening. There are only mere strands of a plot with some filler in-between. Sure, there are some familiar faces, which is nice, but it's not enough. NOT ENOUGH HAPPENS! However, if you want to see Michael J. Pollard play Twister with a cheerleader you can see it here.

There's a Barfight at The Chili Factory (that should have been the title for this movie, come to think of it) which is pretty lackluster, like the rest of this dull film. The dummies that steal the nuke, the guys that look like David Spade and Andre Agassi, are so dumb, it's hard to believe that A. They could break into ANY kind of facility and B. That they are a serious threat - so the movie has no suspense. The bad guys just dance around to the song "Dance the Night Away" by Randy and Liz Jackson. They're not exactly Ahmadinejad.


The babyish, cackling Pollard is always nice to see, as was Leslie Nielsen in a serious role. It was before he was typecast as a wacky comic actor. It's hard to believe, in 2010, that there was ever a time before Wrongfully Accused (1998) and 2001: A Space Travesty (2000), but there it is for the world to see. There was a scene with just Henry, Nielsen and Conaway in a room talking, which was cool, but it could have been awesome if there was some tension or fireworks.

The action largely takes place on an oil rig, and has to do with explosions. Is BP aware of this? It's almost eerie to watch. Almost. Technical notes: John Barrett of American Kickboxer 1 (1990) and Shootfighter (1992) fame and Kane Hodder of Friday the 13th fame are listed as Stuntmen. The screenplay was co-written by Katt Shea Ruben of The Devastator (1985) fame.

In all, this bland film could have used MORE - more action, more tension, more violence, more edge, more Nielsen, more ANYTHING! It's not BAD per se, but despite the good cast, The Patriot is, sadly, lacking.

Does the hero ever wear anything like the suit on the box cover?

He wears some wetsuits, but sadly not the getup on the cover.

Great site design update Ty, looking good! How did you get the thumbnails to appear on the 'latest review' section?

To answer your question: to make the thumbnails, you go to the design section of blogger, and there is a gadget you can use under recent posts.

I tried adding the Recent Posts gadget but it wouldn't show any thumbnails for me. Is there something special I need to do when uploading images?

Hmm. Not exactly sure...but what i found is that you have to configure the gadget. There is a snippet style and thumbnail dimensions. Hopefully this makes sense. I just learned this a few days ago.