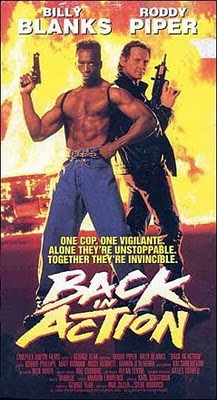 "One Cop. One Vigilante.

Alone They're Unstoppable. Together They're Invincible."


In 1958, Tony Curtis and Sidney Poitier starred in The Defiant Ones (later remade as Fled in 1996). A decade later, Peter Lawford and Sammy Davis Jr. starred in Salt and Pepper (1968), the title of which pretty well spells out its intentions - in our overly-PC society we won't be seeing anything like that anytime soon. Then we saw Robert Culp and Bill Cosby team up for Hickey & Boggs (1972). But then "Black and White Action" reached its highest pinnacle to date in 1993 with the titans Billy Blanks and Roddy Piper in...BACK IN ACTION!

Meanwhile, ex-Special Forces soldier, and now cab driver Billy (Blanks, who must have a Tony Danza-like contract wherein he can only play characters named Billy) gets swept up in the mayhem when he attempts to protect his sister Tara (Kai Soremekun). Her boyfriend is in the Kasajian gang, and she witnessed plenty of murder, and now she's the gang's number one target.

It thus transpires that Rossi and Billy come together, initially with different goals, but now with the same one: eliminate the Kasajian gang. But will their incessant bickering do them in before the gang does?

Back in Action delivers the goods. There is plenty of action and they sure don't skimp on the violence. The young-looking Piper is extremely charming, and has genuinely great comic timing and charisma. and this is easily Blanks' best performance. His karate moves are done with aplomb (and with a lot of growling and grunting). The filmmakers give the viewers a lot of what they want here - a REALLY evil villain that will elicit boos and hisses, constant action and violence, and a bit of nice camaraderie between the lead dudes.

What's weird is that this is the first Blanks/Piper vehicle, yet it is called BACK in action. Shouldn't the follow-up, Tough and Deadly (1995) be called Back in Action? What are they back from exactly? Anyway... 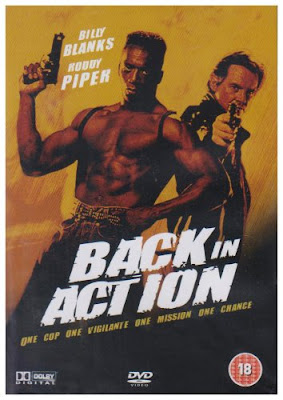 Bizarre antics ensue when two men, who can only be described as "The Karatio Brothers" invade Blanks' apartment. They seem to be twins with beefy physiques who wear striped spandex and seem like a meathead version of Mario and Luigi. Luckily Billy fights them, gratuitously (?) in his underwear. Another great (?) Blanks moment is when he runs in slow motion while screaming and shooting two machine guns. Compare that to self-indulgent dreck like Ticker (2001) where Steven Seagal simply walks down a hall and does nothing action-related. The villain Kasajian in some sort of trance, chanting "smoke is death" over and over again. And watch out for "The Giant"...

Piper's contract must include a 15-minute fight scene, which occurs during the prerequisite bar brawl. He gets to employ some of his wrestling moves such as a sleeper hold and a choke slam. Roddy and Billy should have been the "Wesley and Woody" that swept Hollywood in the mid-90s. Alas, it was not to be. Can you imagine these two in Money Train (1995)?

For a fun, entertaining time, with a lot of high-quality technical elements like good camerawork, Back in Action is prime stuff.

Email ThisBlogThis!Share to TwitterShare to FacebookShare to Pinterest
Labels: 1993, 3 and a half stars, Back In Action, Billy Blanks, Hickey and Boggs, Paul Ziller, Rob Stefaniuk, Roddy Piper, Salt and Pepper, The Defiant Ones, Ticker, Tough and Deadly, VHS

That's a good question; Billy and Roddy in Money Train. That could be some great viewing! And I particuarly loved the fight with the twin Mario's who look like they work at a circus. Amazing stuff.

This movie is a great movie. 'nuff said. Tough and Deadly is a great one as well.

"Bizarre antics ensue when two men, who can only be described as "The Karatio Brothers" invade Blanks' apartment. They seem to be twins with beefy physiques who wear striped spandex and seem like a meathead version of Mario and Luigi."

Those twins are actually Canada's own Twin Dragons, Michael and Martin McNamara. They also did 2 movies together, Twin Dragon Encounter (1986) and Dragon Hunt (1990). You ought to look into reviewing those 2 if you can.

Thanks for visiting our site Ry!

Will be buying Tough and Deadly soon! Dragon Hunt is tough to find! I can get a copy of Twin Dragon Encounter, but it is a little pricey.

Holy crap. Totally adding this one to the 'to-watch' list. Thanks for the recommendation.

No problem, Matthew! I have a feeling you will enjoy it.

Yhis is perhaps one of the greatest movie reviews ever written. Laughed at least 3 times. Just watched it on B Movie TV and it was a blast.

Thanks so much for the kind words. We're glad you enjoyed it. If you like The "Karatio Bros." as we call them, check out Twin Dragon Encounter. It's very very silly.