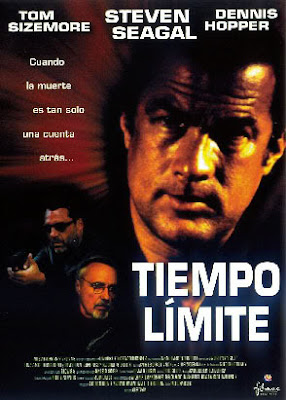 San Francisco Detective Ray Nettles (Sizemore) is a cop on the edge, with a new partner named Fuzzy (Nas). They are dispatched to a crime scene where Irish mad bomber Alex Swan (Hopper) and his gang are hiding. Nettles punches then arrests one member of the gang, Claire (Pressly). Swan becomes enraged and a shoot-out follows, with Fuzzy getting shot and dying in Nettles' arms.

Swan escapes and is now terrorizing the city with bomb threats. After Nettles' always-angry Captain Spano (Joe Spano in the role he was born to play) yells at him, Nettles is partnered with the bomb squad. The leader of the squad is the Zen-spoutin' "Glass" (Seagal). Now it is a race against time as Glass and Nettles scurry around town to try to defuse all the bombs set by Swan. 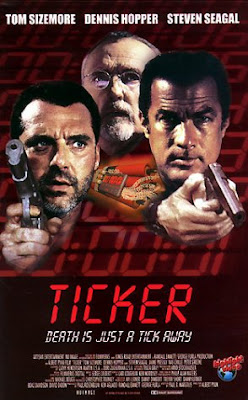 There are so many uproarious moments in "Ticker". Here are just a few that stand out:

1. All the explosions from the bombs are culled from stock footage, and in one particularly funny sequence it jaggedly cuts to Sizemore's face. He then does a bugged-out look in "surprise" at what he is "seeing".

2. In one scene, there is a bomb-sniffing dog and the cop asks the dog: "Hey boy, do you smell nuggets?" Insert Seagal fat joke here...

3. Speaking of which: Seagal shot this movie both during AND after Exit Wounds (2001) and during that time his weight fluctuated wildly. So when the final film of Ticker was cut together, his weight noticeably changes from scene to scene. Even the many (too many) close-ups of Seagal's face can't disguise the feature-length continuity error that is his constantly changing girth.

4. We're all familiar with Seagal's laziness in doing his own ADR work. He gets someone else to say his own lines. This person sounds NOTHING like him. Ticker is rife with this. We expect that with Seagal, but with Sizemore? A man who doesn't match Sizemore's gruff voice at all did a few of his lines. Maybe the well-known "Seagal Laziness" was contagious on the set.

5. There is a supposedly "cool" shot where Seagal is walking down a hallway in slow motion. It goes on for a good three minutes and it is not cool at all. It is there to obviously pad out the running time and give Pyun a chance to pretend he is Tarantino for a day. Seagal's gait provokes prolonged laughter instead.

6. Watch out for Seagal's "Hitchcock-style" (in more ways than one...) cameo as a bearded jazz guitar player in a club. Nettles and Glass walk into the club and thus Seagal watches himself on stage for a split second. How meta. Not just Van Damme can play a double role.

The rest of the cast is slumming beyond belief, especially Hopper. All of his scenes are shot in close-up and he speaks in an inconsistent Irish accent. Ice-T is in this mess for two seconds as a terrorist.

All in all, Ticker is a "blast" to watch with friends.

Quoth Seagal in the last line of the movie: "Love is eternal and that is a long time."