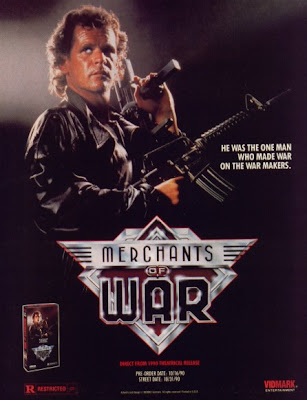 
"He was the one man who made war on the war makers."


He's back...for some reason! The monosyllabic mullet-head returns for the better of his two headliners. And you thought his hair was his only headliner (Groan).

Asher Brauner, of American Eagle (1989), as if you didn't know, is back this time as Nick Drennen, a mercenary badass called in to do "one last mission"  - dismantle a middle-eastern terror sect in Angola. While there, he is captured and subjected to the prerequisite tortures. While there, he befriends a young boy and names him "Bugsy" because his African name is too complex for him (and because when they first met Drennen was eating bugs to survive. Bugsy gave him some Ostrich jerky and their bond was formed).

Let's not forget Drennen has some brothers in arms from his days in 'Nam to help him fight his way through the baddies. Jesse Vint plays Frank, and John Barrett appears as Tom. Barrett is always nice to see and has had a relatively under-reported-on career in action cinema. He also has a credit as Stunt Adviser on the film. Click on his tag to read more about his other films on our site.

Will Drennen and the gang be victorious against the legions of anti-American baddies after the Government cuts their ties with the mercs?

The good news is that this film is a pretty big improvement over American Eagle. Interestingly, it seems that THIS movie should have been called "American Eagle" and the other one should have been called "Merchants of War". But anyway, the direction is tighter and more professional, and the whole production seems more controlled. And it all kicks off with one killer of a theme song. Imagine a cross between Final Mission's (1984) immortal "Always on my Mind" crossed with "Livin' on a Prayer". The singer, Chris Thompson, bellows about "Merchants of Waaaaaarrrrr" with an almost-perplexing level of passion. He really cares. A little too much perhaps. But we loved the enthusiasm of it all.

Luckily, Merchants has some of the things that make action films worth watching. For some unexplained reason, a team of drunken rednecks is assembled to fight international terrorists. During a recon mission where Drennen gets some local help, he just happens to have an exploding camera. Drennen should have gone after Castro. Another great weapon in his arsenal is a dart in a slingshot. Hey, it's more original than a gun. One of the main baddies, Abdul, has absurd hair that seems to be one of the more obvious wigs we've seen. One of Drennen's comrades is oddly named  "Vincent D'Onofrio".

During the extended torture/imprisonment section of the film, Drennen is subjected to the dreaded "daily laughing". Every day, a man appears in a window solely to laugh at him, then he walks away. Chilling stuff.

It all comes to a head at the "Third World Convention". Just imagine a convention of all the hellhole countries where the leaders come to the podium and rant and rave against America. Actually you don't have to imagine the U.N. Just try and keep me away from this convention. Where do I sign up? Drennen isn't having any of this anti-American dross so he crashes the party and lets his missile launcher do the rebuttal.

Purchased this one over the holiday season and can't wait to watch it. From your review it sounds like it's definitely Brauner's movie but I'm hoping for a few scenes of John Barrett punchfighting.

Looking forward to your opinion! Unfortunately, there are no scenes of John Barrett punchfighting, just shooting with machine guns!

Ah, that's sad to hear! A lack of punchfighting might DQ it from appearing on the FoBL blog.

I'll definitely get back to you at some point here with more thoughts after I've gone a round with it.

Ok cool! There is the great title song in the beginning of the movie though!