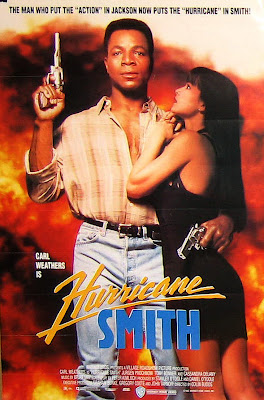 
Carl Weathers is Billy Ray "Hurricane" Smith, a construction worker from Marshall, Texas who receives word that his mother just died. Wishing to tell his sister Sally Mae the news, he travels to her last known whereabouts: the Gold Coast of Australia. While there searching for his sister, he becomes embroiled in a drug-fueled gang war between Howard Fenton (Bonner), with his merciless 2nd in command Charlie Dowd (Prochnow) and a gang called The Gillespies. With the help of a “hooker with a heart of gold”, Julie (Delaney) and her “Pimp with a heart of gold”, Shanks (Argue of Midnite Spares fame), Hurricane takes on the gangs in the search for his sister.

A mustache-less Weathers makes the most of what he can in this fish-out-of-water tale. He is likable as the Texas boy caught up in the “criminal syndicate of South East Queensland” - but the film needed more action in its lagging middle section. Prochnow plays the classic villain tailor-made for audiences to boo and hiss at. You really hate him, but you have to wonder if he remembers anything about making this movie. Our guess is that he probably didn’t see it as anything special. After the success of Action Jackson (1988), Warner Brothers seemed to just dump this movie into video stores with little or no fanfare. True, it’s not as good as Jackson but perhaps they snubbed this film in the promotional department. 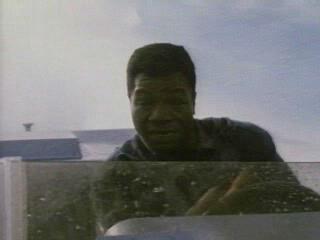 The best things about Hurricane Smith are the Australia locations, according to the credits primarily filmed in Brisbane, and the colorful characters. Besides the aforementioned Shanks with his over-the-top attitude and Warrant T-shirt with red suspenders, there’s cranky old salt Griffo (Ewart), and you know Howard Fenton is evil because of his dastardly bolo tie.

Also of note is the unabashed racism in the movie, which they would never do today in our P.C. times. There seems to have been no shame or attempt to hide it, but it’s all coming from the baddies, so it’s okay. Such things in the script would never fly today, so Hurricane Smith shows the time and place in which it was made, which is always good. Also Americans are disparagingly called “Septics” - some sort of Cockney rhyming slang-type insult for “Yank” - “Septic Tank” or just “Septics” for short.  Are we still being called that there?

It must be in Weathers’ contract that if he is in a starring role, the movie must be named after him (and have a colorful name at that) - Fortune Dane (1986), Action Jackson, and now Hurricane Smith. Also the soundtrack must be drenched in sax.

There’s a lot to like about Hurricane Smith, but there are some flaws that kept us from being entirely satisfied with the end result.

Yeah, this middle section was kinda slo, but overall it was still a pretty entertaning film, and IMO better then Action Jackson as a whole. BTW I tihnk this film actually DID get a very limited theatrical release in the states, but i'm not entirely sure.

It definitely had some decent moments. Carl Weathers is always good.

Also We have an Action Jackson review coming up soon.

Gotta love Carl Weathers. He was like the poor man's Billy Dee Williams with more action. I'll have to check this out, and I can't wait to see your Action Jackson review: Vanity and Craig T. Nelson, 80s classics.

Totally agree with you. Carl Weathers rules. Would be interested in your take on it. Also Action Jackson is a classic!