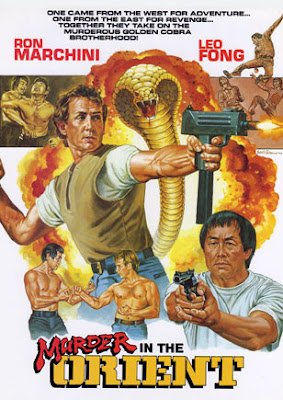 During World War II, When the Japanese were fighting in the Philippines, they buried a stash of gold. They decided to abandon the traditional "treasure map", deciding instead to engrave directions to the loot on two separate samurai swords. Now, in the swingin' seventies, the nefarious Golden Cobra Gang has one of the swords. They desperately want the other one. Gustavo, a higher-up in the organization, really wants to please the head boss, King Cobra, so he pulls out all the stops to get the missing sword: he brings in Kang the Butcher, a ruthless assassin, and of course Turko. But he makes a fatal error in his quest. He kills the sister of Lao Tsu (Leo Fong, not the ancient philosopher...interesting character name choice).

Now Tsu, a peaceful Hong Kong martial arts instructor, must travel to Manila to get revenge. On top of that, the American Paul Martelli (Ron Marchini, in another stretch) is caught up in the madness because he was involved with Tsu's sister. Now Martelli and Tsu must take on the Golden Cobra Gang. Can they do it? Who will get the sword? Who will get the Japanese gold? Where does the gang find an endless array of goons willing to fight Marchini and Fong?

This movie is pretty taxing for your ears. The sound is horrid, it sounds like it was recorded in a bathroom using the first tape recorder ever made. Add to that, most of the cast has a thick accent. Even in the dubbing, which doesn't help. The many jarring jump-cuts don't help either. So a big percentage of the movie is unhearable. And don't try raising the volume. Sure, Ron Marchini doesn't talk much in the movie, but that's probably for other reasons. But every little bit helps.

Acting-wise, it truly is a case of "flat and flatter", as the filmmakers found the two action stars, nay, PEOPLE on the planet with the most flat, wooden delivery ever. And they talk to each other. And we try to hear them. What a mess. But it's a fairly fun mess. Marchini and Fong have one short fight scene, before they realize they must team up, and it's okay, not great. It should have been longer and more dynamic. 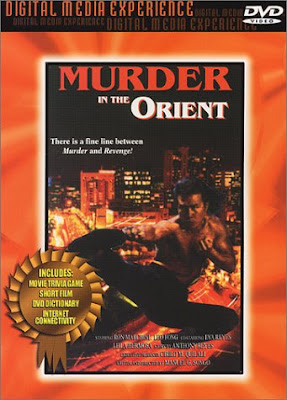 A martial arts adventure tailor-made for drive ins, this has a very seventies feel, which is one of the big selling points of the film. People wear shirts and dresses with wild, colorful patterns and huge collars, and the soundtrack is funky. Marchini gets yet another torture scene for his resume. It must be in his contract.

So it's not great, but don't scrutinize it too closely. At a scant 73 minutes, why not add another Fong/Marchini movie to your collection, especially if it's one of those cheap gas-station DVD's?

NOTE: One of the main people the filmmakers choose to thank in the end credits is the "Philippines Mental Health Association, Inc." If you make it all the way through Murder In the Orient to see this credit, it makes a disturbing amount of sense.

Love me some Leo Fong!

Happy you love Fong! and we have three more Fong movies coming up which includes Low Blow!