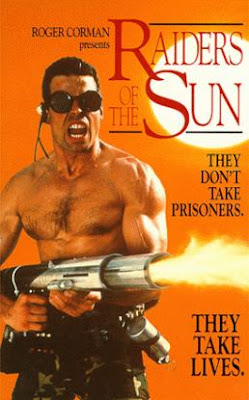 Brodie (Norton) is a warrior in a post-apocalyptic world. He works for the Alpha League, a democratic society trying to keep the madness and the roving bands of scavengers at bay. The leader of the bad guys, Clay (William Steis), is a traitor to the Alpha League cause. Since there is constant shooting between the factions, it is discovered that there is a shortage of gunpowder in this barren world, and whoever finds any will rule the wastelands. So the Alpha League sends Brodie in search of the now-precious material. Along the way, he falls in love with a native, mountain girl named Sierra (Lani Lobangco). The primitive society she comes from, of course, has a mine full of gunpowder. They use it for religious ceremonies. Oh, and most of the people in the mountain village are midgets. The baddies just want to plunder it all but now Brodie and his midget army must defend the mine. Meanwhile, the warrior Talbot (Blake Boyd) wants to get back to his wife Vera (Stenberg), but she's kidnapped by the baddies and jailed. Will they reunite? Will the good guys get the gunpowder? Why is this all happening...again?

I'm not sure if it should be applauded or condemned that they were still making Mad Max (1979) knockoffs in the 90's. This Corman production left it in the capable hands of mainstay Cirio Santiago, and I suppose that's the wisest possible decision under the circumstances. He does a competent job, nothing great. If Richard Norton wasn't involved, this would be a real slog. He doesn't do a ton of martial arts in the film. It's different to see him with a beard. That's obviously a character choice, as you can't really shave after the apocalypse and you must protect your face. 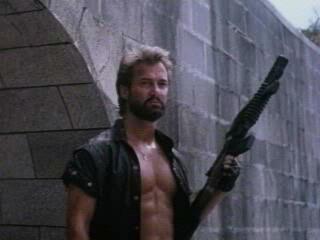 The baddies, like in Karate Cop (1991), wear football equipment. There are some interesting antagonists this time around, such as Nick Nicholson from No Dead Heroes (1986), and characters such as Hog Head, Meat Ball and of course the duel between Talbot and Gonzo Gonzales (Hourani) where they swing back and forth on ropes swiping at each other is, well, not memorable, but...something.

Yes, there is the constant shooting and blow-ups, and the standard post-apocalyptic stuff like wacky costumes and cars with weird things attached to them. And yes, it is pretty dumb. It doesn't add much to any of its post-nuke forbears. It holds your interest, only just barely. But it's not really meant as anything other than cheap entertainment, so you can't judge it that harshly.

I must give the film the credit of having a pretty badass poster.

I went back to my review on this to remember what I thought. I guess as I was writing it REO Speedwagon's "Take it on the Run" was playing in the background. Anyway, I had this one as one of those you only take on if you're a bad movie veteran. If you have the chops to get in and get dirty, by all means, go for it. Richard Norton carrying off his flamboyant Han Solo outfit was great too.