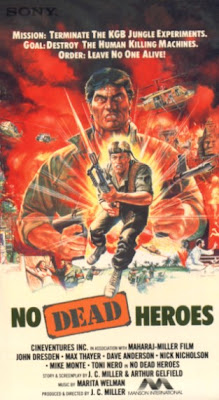 Directed by: Junn B. Cabreira

When ridiculously evil Russian General Ivan Dimanovitch (Nicholson), who naturally runs a prison camp in Vietnam, is holding an American CIA agent in his horrid cages, badass soldier dudes Richard "Ric" Sanders (Thayer) and Harry Cotter (Dresden) are sent in by their commanding officer Baylor (Monty) to save the man and free the camp - in the next 24 hours. If the man succumbs to the torture tactics of Dimanovitch, he could spill information sensitive to the U.S. Just when we as viewers are acclimating to this, we see a title on screen - TEN YEARS LATER (!)

Dimanovitch has captured Cotter and he makes him undergo a surgical procedure in which a microchip is implanted at the base of his skull. This chip turns him into an emotionless killing machine controlled by a Casio wristwatch. Of course, Dimanovitch is wearing the watch and pressing the buttons. The plan is a total commie takeover of the world, and since he hates religion, to use Cotter to assassinate the Pope. So Baylor sends Sanders, now a private citizen, into the fray to take down all the baddies and stop Cotter. With the help of Barbara (Nero) and of course an arsenal of machine guns larger than most armies, will they be able to stop the nefarious evil planning to take over the world?

If movies were judged by the amount of people that die in them, No Dead Heroes would win awards. The kill count is huge, and there are even surprising lashings of gore. Try to imagine a cross between Wardogs (1986) and Invasion U.S.A. With maybe a dash of The Devastator (1985) thrown in for good measure.

The movie starts with an explosion in the first second, and many more follow throughout the majority of the film's running time. In the funny department, even though he is an evil commie rapist, just look at Dimanovitch's henchman Lopez. He is an obese, bearded man that looks like Castro. Speaking of which, No Dead Heroes shares Invasion U.S.A.'s patriotism, and the prerequisite speeches are made against America, capitalism and religion...all this angers super-patriot Sanders who truly is a one-man army. Additionally, since his buddy's name is "Harry Cotter", every time they say it, it's hard not to imagine the beloved, bespectacled children's character (with one letter different, of course) massacring people and attempting to knock over the PopeMobile.

You're really not a super-villain unless you have a terrorist training camp (or, in the case of American Ninja (1985), a Ninja training camp) and when Sanders and Barbara show up with guns blazin', that will certainly knock you off the monkey bars!

Behind the camera, we have producer Anthony Maharaj, responsible for some Richard Norton epics, including Not Another Mistake (1988). Apparently he likes being involved in movies where there are "No" something or "Not" something. It's quite a formula for success. Also there is a credit in the movie for, and I quote, "Meal Checker". Maybe there was a mad poisoner going around bent on the indigestion of Max Thayer, so it's good the production sprang for him.

For classic 80's uber-patriotic shoot-fests that require zero brain power, (and, thankfully there is zero irony), top marks go to the impressive No Dead Heroes.

This one looks great Ty, I'll have to grab it. I don't know how you find the time to review all these, or how you find out about some of them in the first place! I'm finding it hard to get one in a week.

I definitely look forward to your review when you see it!

Sometimes it is tough to make time too.

we usually watch the movies at night time and write the review as soon as we're finished.

We are always backed up with movies to watch! Can't stop buying VHS on amazon.com!

If it wasn't for the outrageous overseas shipping rates Amazon put on stuff sold through 3rd-party buyers (their own rates are quite reasonable) I'd stock up too! But this movie with no DVD release looks like one (along with the awesome Ghetto Blaster) I really just have to buy...

Ghetto Blaster looks great! Never seen it before but it has clown suits and gangs in the same movie! must buy!

Awww, damn it! Now I wanna see this so bad, and I can't find it anywhere!

Originally came across one of your reviews on imdb but finally landed on a review based on a recommendation from Matt at DtVC. This site is fantastic!

I knew I wasn't the only one out there who dug Max Thayer movies, but thanks for putting pen to the virtual page for these. I had a lot of fun with No Dead Heroes and you're right to mention that there was a bit more gore than one would expect from this type of movie. The birthday party scene, for all its gruesomeness, was pretty hilariously edited and the dubbing of the wife's voice was both atrocious and awesome.

NRNS2 is what turned me on to the cinematic magic that is Max Thayer, but this and Retrievers really cemented him as an underrated 80s action star in my mind. If you haven't already, check out the trailer for Deadringer, a movie he did with Teddy Page. I've yet to find it on VHS or DVD, but it looks incredible. You can also find a flick called Phantom Soldiers on YouTube in its entirety but I recall the dubbing was a touch awful.

No Dead Heroes is a bonafide winner and thanks for your kind comments! We always wanted to see Phantom Soldiers.

Ty: I have the Jap VHS of Phantom Soldiers and can send you a 16x9 custom DVDR if you are interested in one. Also reviewed it on my site!

Sure! that is very nice of you Sutekh! As a trade, we can offer you an Action U.S.A. DVD-R copy.

I don't want to put our address on the blogger site, but here is my email: Tarbosh777@yahoo.com.