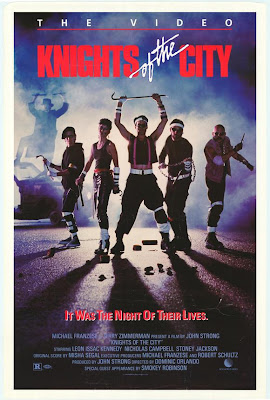 Could it be that there is a movie that combines Body Rock (1984) with Chains (1989)? Yes, it exists: Knights of the City has to be one of the silliest movies ever, and, coming from us, that's really saying something.

The Royals are a street gang in Miami. The core members are also in a band called the Royal Rockers. The Mechanics are a rival gang moving in on their turf. One night after a rumble, they end up in jail. Like most jails, The Fat Boys and Kurtis Blow are there and everyone in the cell starts dancing and rapping. Luckily, Delamo (Ansara) is in the cell next door for being a raging alcoholic. Of course, he is the head of Twilight Records. He likes what he hears and sees, so he gives the band a business card. The next day, the band shows up at the offices and drops off their demo tape (which sounds exactly like Michael Jackson). His daughter Brooke is in charge of A&R and wants to sign them, but they didn't leave any contact info on their tape. So she starts a contest, "Street Contest", to try and find acts in the inner city. This was pretty ahead of it's time; try to imagine a ghetto "American Idol" or "America's Got Talent". She finds the band, but the leader of the Royals/Royal Rockers, Troy (Kennedy) falls for her. Conflicts ensue when her high class world meets his lower-class one. But wait! There's more!

Joey (Nicholas Campbell) is a die-hard Royal, and, due to the rising popularity of the Royal Rockers, thinks Troy is losing his edge and forgetting his roots. But fellow Royal/guitarist Mookie (yes, Mookie) (John Mengatti) wants to go the music route more, and Troy is torn between them.  But Troy sees winning the Street Contest as his way out of the ghetto. Thanks to Brooke, he's seen the other side of life, and now wants to be a part of it. But there's yet another conflict at hand. Jasmine (Wendy Barry), Troy's former girlfriend is competing against him in the contest...and she's being coached by none other than Carlos (Moldovan), the evil head of the Mechanics! And did we mention their bad-ass gang hideout is an abandoned TUGBOAT!?!?  A freakin' TUGBOAT! As if all that wasn't enough, both gangs are constantly being harassed by grumpy cop McGruder (Floyd Levine)! How will Troy deal with all this, to quote him, "Jive"?

CRUCIAL PLOT POINT THAT I FORGOT TO MENTION: In rehearsing for the contest, they decide their dance moves are not good enough so they hire Flash (Jeff Kutash) to show them how to get down and get funky in the proper manner. Naturally this leads to a montage of dance training. Don't ever forget about Kutash.

Besides the aforementioned Body Rock and Chains, Knights of the City can also be compared to a cross between West Side Story (1961), Beat Street (1984) and The Warriors (1979). There are gangs, and they do gang-y things, but they will throw down some breakdancing moves at the drop of a hat! At any moment, a dance could break out. Even Denny Terrio of Dance Fever fame appears as himself, along with all the other guest musical stars!

Forget all the ham-handed acting (or in the case of Nicholas Campbell as Joey, yelling and screaming) where everything every character says ends in "man!"...the TRUE stars of Knights of the City are THE COSTUMES! The clothes that people wear in this movie are truly astounding. They must be seen to be believed. NO 80's movie or music video you have seen before can prepare you for the awesome outfits. Top honors go to Costume Designers Celia Bryant and Beverly Safier. No wonder it took two people. If there were any justice in this world, they would be more recognized for their abilities. I would try to describe the clothes for you, but not only is that pointless, I think it might also count as a "Spoiler Alert"!

In another completely absurd turn, none other than Smokey Robinson shows up as the MC of the contest. He seems stiff and confused. Maybe getting onstage in front of judges such as Dean Dean made him nervous.

The Royals are a ragtag group of street ragamuffins, and they supposedly are rude, crude and have a dangerous 'tude, but in actuality they are obnoxious and annoying. No wonder Troy wants to drop them like a bad habit. For example, Carlos' big insult to Troy is to repeatedly call him "Fish Lips". But there does seem to be some weird, last-minute editing out of swear words, so that might make sense. But the movie is still rated R, so...why? But at its core, Knights of the City is really a movie with a message. Reach for the stars!

This one definitely brings me back to the video store. I think my grandmother made me rent it back in the day.

It still holds up as a really funny movie. Did your grandmother like breakdancing and gangs? lol.

Wow, I loved this one. I remember seeing the talent it had, which made me rent it, but I glossed over the cover, and thought it read "Kansas City", so the whole time I'm like "this isn't Kansas City..."

It is a classic! The Fat Boys and Smokey Robinson mixed with some breakdancing all in one movie!

The jailhouse rap is a classic (Kurtis Blow rocks the mic!) I'll watch anything with Leon Issac Kennedy (have you seen BODY AND SOUL or DEATH FORCE?)
Kennedy seems very reluctant to sing in this movie (despite playing a singer)
Like you, I cannot understand why this movie was rated an 18 in the UK either.

I could easily spend days reading all these reviews. I really need to buckle down and review more for my own blog.

That's very nice of you to say! As for Death Force, it is hard to find in the U.S., We've always wanted to see it.

Thanks for the info. Found a copy of it on Amazon. Will buy it very soon.