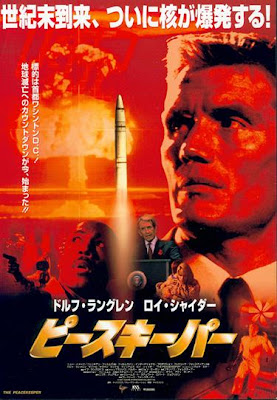 
Air Force Major Frank Cross (Lundgren) is a man who plays by his own rules. He went off on his own to deliver rice to the starving Kurdish people. The brass gives him a choice: a court martial, or carry a suitcase with the nuclear codes in it and have the President, Robert Baker (Roy Scheider) be seen with him in a photo-op. Cross chooses the latter, but some baddies, led by Douglas Murphy (Sarrazin) steal the suitcase. It seems Murphy and president Baker have a history, and Murphy is a disgruntled vet of the first gulf war with a real hatred for Mount Rushmore.

So, being the loyal soldier that he is, Cross chases the evil suitcase-stealers all over town, dodging countless perils along the way. At some point during his dangerous mission, he meets Lt. Colonel Northrop (Williams). Can the two work together in a race against time before the bad guys blow up the President...and the world? 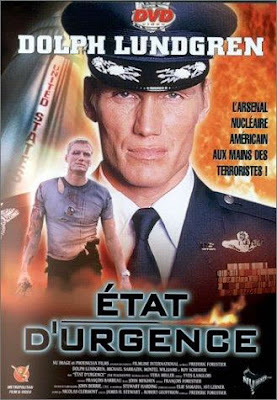 It seems this Nu-Image production was a very earnest attempt at a less-silly Direct-To-Video product. It appears every attempt was made to make The Peacekeeper "Theater-Quality", even if the filmmakers knew full well that that wasn't gonna happen. I guess they, realistically, weren't going to give that same year's The Peacemaker (1997) - the George Clooney vehicle - a run for the box office bucks. But it matters not, as Lundgren's dry, cool charm is in abundance. Even though a stab at seriousness was certainly made, perhaps the only misstep they made was hiring - of all people - Montel Williams in a rare feature film role. What, were Ricki Lake, Phil Donahue and Jenny Jones busy?

Of course, it's not the first time Dolph Lundgren has starred with a daytime talk show host in a film - everyone remembers The Defender (2004), right? In that one, Jerry Springer is the President. Not Roy Scheider. And of course, there's Citizen Verdict (2003). So there you go. And while you would think Lundgren and Montel would be the ultimate team-up that would zoom you right through any movie, The Peacekeeper is overlong at 98 minutes, is talky at times and has plenty of padding. For example, the plot is, in a nutshell: "Terrorists steal the nuclear suitcase. Dolph wants it back". That's it. Is there any conceivable reason that it should have a running time longer than 80 minutes? And those minutes should have more rock, less talk.

The Peacekeeper is at its best in its action scenes, not dialogue. It should have stuck more to what it was best at. For instance, there is a building rooftop chase - the kind normally done on foot - but here it's done with cars! We liked that innovation and there is where the film shines. 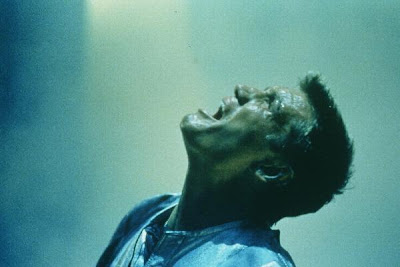 Yes, The Peacekeeper could have afforded to be a little snappier, but it does end with a freeze frame, highlighting the charm and camaraderie of Dolph Lundgren and Montel Williams. No, that sentence isn't insane, you just have to watch the movie. Or at least the action scenes.

I thought this was quite a solid Dolph movie. Interesting plot and decent action riddled throughout. I have the French "Etat D'urgence" version just like the poster in your review, the only fully widescreen cut.

Very interesting about the Widescreen cut. Also I agree about the decent action. The rooftop car chase was pretty cool!

Yes, it did have a lot of memorable moments.