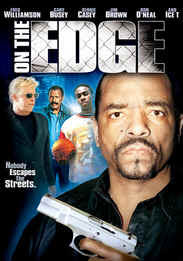 "Nobody Escapes The Streets."

Willie Jo Harris (Derrick Franklin) is a young, star basketball player on the rise. His dad Frank (O'Neal) is very proud of him. But he did a stupid thing. He bought some drugs from local hood Slim Jim (Ice-T). Now he owes him a lot of money. But some goons dispatched to kill him accidentally got the wrong house and kill the wife and son of Rex Stevens (Casey). Harris asks Dakota "Dak" Smith (Williamson), an ex-cop, golf enthusiast, and private eye, for help. Now old buddies Frank, Rex and Dak have to team up to fight the gangsters and corrupt cops. One of the main targets is the ruthless assassin Felix (Busey). Will these "Original Gangsters" be able to take down the baddies and win the day?

Also it is worth mentioning that Jim Brown is on hand as Chad Grant (doesn't he just look like someone named "Chad"? Come to think of it, Bernie Casey doesn't scream a guy named "Rex", so there you go), an ex-football player who runs "Challenges" Community Center. Not typecasting at all. And none other than Gloria Allred has a small role as "Councilwoman Gloria Johnson". I guess she has to get herself in front of a camera at all costs. ALL costs. Where else would Dakota go for info about the streets?

Director/Star/Co-Writer Williamson corraled his old pals to appear in one last blast, and sadly, it was the last appearance of Ron O'Neal. As we've mentioned before on this site, "never have a last movie". Williamson has a nice anti-crime/drugs message here, in what can only be described as a "neo-blaxploitation" (or neoblax, for short) film. It seems to be an attempt to marry the old-school blaxploitation style of the 70's, with the newer, direct-to-video brand, represented by such titles as Dead Homiez (1993), State Property (2002), Paper Soldiers (2002), etc. Unfortunately, it has a cheap, junky feel to it, and in many scenes, the dialogue is nigh-impossible to hear because there is also some rap music blaring on the soundtrack, and it actually drowns out the actors. And don't try to turn up the volume, because the overly-loud music comes with it. So while we want to hear what The Hammer is saying, instead we hear the jam "Everybody Wants To Be A Gangsta". Luckily, it is my jam. But it just seems like a blatant attempt to "be cool" and stay hip with the kids. We, the audience, know Williamson, Casey, Brown and O'Neal don't listen to this "rap-music noise".

There are some entertaining and funny things about On the Edge, not the least of which are Willie Jo Harris' hair, Ice-T's absurd suit, the usage of the (years-old by this time) "Whhaaazzzzuuuupppp?" - I assume that's how you spell it, and the presence of Gary Busey. Sure, he's not using his classic word he pioneered in Bulletproof (1988), "Butthorn", but luckily he has a great mixed-metaphor line with: "This has all the makings of a setup...but I'm holding the ace." And if you've ever wanted to see Busey do a drive-by shooting in the same movie as Williamson's classic "Fred-Fu", this is the movie for you.

But the true headline for On the Edge should be "Bernie Casey with a rocket launcher". 'Nuff said.

Inexplicably ending with the word "Gone!", On the Edge is notable for its cast of lovable favorites, but it might be wise to stick with the more classic-era Fred Williamson titles.

Always good to read some Fred Williamson Action reviews. Keep up the good work guys.
Looking forward to your take on the Special Forces DVD. The whole American Heroes collection is top notch Action goodness.
Be sure to also check out Navy Seals 2 if you have not already , as this series too is Explosive entertainment, with Navy Seals being one of the very best all out Action flicks on the block.

Thanks Paul! All the American Heroes movies have been watched and reviewed and they will be coming soon starting with Submarines. You are totally right, Navy Seals is a classic!

Also we will be happily following your site!

Pleased to have discovered your site Ty. Looking forward to having you stop by Ballistic Blood Bullets.
U.S Seals is in fact the series I meant. There are three & all Big Fun, but U.S Seals II is an instant attention grabber, Director Isaac Florentine. I do still have a soft spot for Navy Seals mind you with Michael Biehn & Charlie Sheen. Paul

I remember seeing "Surviving the Game" with Ice T & Gary Busey, some years ago, and I quite enjoyed it.

I haven't seen "On the Edge", but the cast seems awesome: Gary Busey, Jim Brown and Fred Williamson! Too bad I always have too high expectations when I see such actors listed, and mostly I end up disappointed with the feature.

You are totally correct, I almost fall for that everytime. Surviving the Game is a classic. On The Edge is unfortunately kinda junky. It is a waste of a good cast.

'On The Edge' has it's moments, but sadly only comes across as an even more watered down ORIGINAL GANGSTERS. For Fred-Fu or Busey completists, it's a must-buy (although i could have done with NOT catching a quick glimpse of Fred's ballbag, during the love-scene)

I went back to my old review and found I loved this one. The music was something in particular I loved, because you had the hip hop contrasted with the older generation's more soulful music, demonstrated in a group awesomely titled Love Machine.

I think where Williamson was going in general was more of a social commentary about the gulf between young and old black America, and though it was low-budget and on a cheaper film stock, I think it did well in that aspect. It was also sufficiently Abusive, and that's always good.

Yeah, I saw this back in 2010 to 2012 when I was watching B-action late at nights on Netflix streaming on a regular basis.

Very watchable disappointment; I don't remember much about it other than Ice-T playing a rather pussified villain, Williamson capping 3 stupid bastards while struggling to both co-star and direct & Gary Busey looking rather surprised to be here.

This used to come on late at nights on FX Network which would've been a cool way to see this but alas it no longer does that so just pass on it I guess.

This is a definite disappointment given the cast. Down N'Dirty is a better. It's similar though. Haha.

Found this one pretty enjoyable overall, had no idea Gloria Allred was in it though.

There's actually a fourth movie in this series called "Rage Within" but I couldn't for the life of me find a DVD of it anywhere(even though it supposedly did come out in 2004), I had to import a VCD from YesAsia to see this one(fortunately it played fine on PowerDVD).

Happy you got to see it! We always wanted to see this as well.