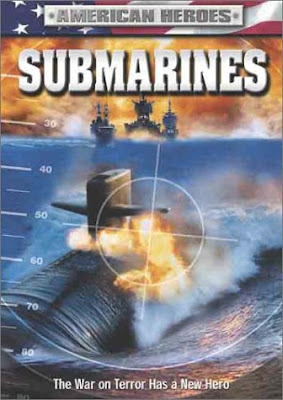 "The War On Terror Has A New Hero"

After 9/11, Nu-Image apparently decided to do their part and make some patriotic movies based on each branch of the military under the banner of the American Heroes Series - Army, Navy, Air Force and Marines. At least we think that was the idea. Unfortunately, these films, while extremely well-intentioned, are without character development and thus you cannot care about what goes on. The exception that proves the rule is Special Forces, which is actually good. The movies are Submarines, Marines, Air Strike and Special Forces.

In this mindless undersea outing, Robert Miano plays basically the same character he does in Ministry of Vengeance (1989) - a cloak-wearing Islamic terrorist named Sajid Kahn. He loves filming his murder and mayhem on a little video camera and seems to be obsessed with CNN. He mentions it often and even namechecks Wolf Blitzer. Terrorists being fans of The Situation Room explains a lot, actually.  So naturally this baddie hijacks a submarine and makes life a living hell for the crew of a fellow sub populated by the good guys.

But our heroes have enough problems as it is, as the Captain crashed into a Russian sub and his crewmates have nicknamed him "Captain Crunch". Besides dealing a crushing blow to his ego, it has severely impeded his ability to fight The Soggies.

Thus follows a lot of chasing, shooting, water filling the sub and other pitfalls that can befall a submarine. That includes a lot of CGI water and torpedoes. Yes, I said CGI WATER. Also not only is the dialogue complete gobbledygook (and from what some sources say, completely inaccurate), but it is also garbled and hard to hear. Perhaps they were ashamed and they turned the volume down. 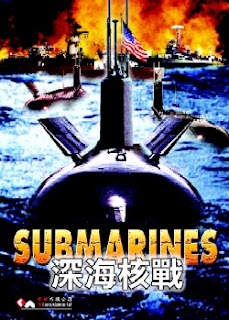 This is another straight to video product where the cast all closely resemble other stars. The lead guy (sorry we haven't mentioned his name, but names are either never said or impossible to hear), SHOULD have been played by Treat Williams. The presence of Treat would have added a lot. But in actuality this is nothing more than a standard, dumb sea slog that makes Counter Measures (1999) look like a masterpiece. Heck, it makes the little-seen William Shatner vehicle Falcon Down (2000) look like a work of art.

Submarines has no human interest, no personality and no reason to watch. You're constantly shouting at the screen "who are these people?" - referring both to the actors and the characters they are playing. At least Counter Measures has the presence of Dudikoff. Submarines has nothing to recommend it, really.

Thanks for the heads up on this one Ty & Brett. I have enjoyed all of the ground force American Heroes movies that I have & seen, but something was warding me off Submarines as it felt like a tag on under the American Heroes banner. Sounds like I was correct to listen to 'The Force' & stay away :) .
I need to find time to dive into my collection of Operation Delta Force DVD's.

No problem. Submarines was the weakest one.

Three months ago, I got this as an Entertainmart along with other DTV, indie or lesser seen mainstream fare.

Not sure if I wanted it just more to see just how bad it was or because I'm a big Robert Miano fan (gotta love that dude) but while I knew it was from the American Heroes line of bad ''Die Hard-on-a-something'' rip-offs and never stated as being as "great" as the Operation Delta Force series, I decided to pick it up for 2 bucks.

For 2 Dollars, this is ok. Special Forces is the best American Heroes one. Robert Miano is always great.

Yeah, I saw Special Forces on either YouTube or just did Rapidshare; Isaac Florentine did an impressive job considering the budget and got a lot from his under appreciated cast.

These other American Hero titles have such movie page scores, it's ridiculous but I'm sure I'll see Air Marshal & Marines at some point but boy howdy that pain stays with you awhile…

It's a shame that some of these Nu Image/Millennium Films regulars aren't often seen anymore. I find Dean Cochran, Joe Lara, Frank Zagarino and Bryan Gennesse to be rather fun to watch.

We agree about Zags and Lara. The era in which they thrived is sadly over. But they had a good run.

Another one who branched out and appears to be in a mixture of indie & mainstream films in addition to still being a Nu Image contracted talent is Todd Jensen.