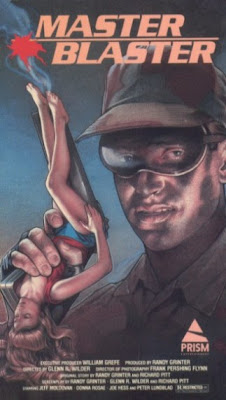 
Somewhere in the wilds of Florida, the "First Annual Master Blaster Grand National Championships" is going on. Here, the best people in the world at paintball (truly something to be proud of in life) assemble to win the fifty thousand dollar prize. But something sinister is afoot. Someone in their midst is using real weapons and killing off these "weekend warriors" for real.  Will the Vietnam Vet loner/drifter Jeremy Hawk (Moldovan) be able to save the day, meanwhile romancing the ex-cop with a tragedy in her past, Samantha Rosen (Rosea)?

A clear attempt to marry the prevailing 80's trends of paintball and wilderness horror movies best exemplified by most of the Friday the 13th series, with a dash of Romps thrown in for good measure as exemplified by some of the crude and juvenile summer-camp humor, Masterblaster truly exemplifies the phrase "jack of all trades but master of none" and fails at providing fans of any of these three things with what they really want. But that's not to say the movie is a failure. The way we see it, these malformed elements place it in a unique position to be an underground 80's classic. The ridiculous music (check out the awesome title song by Ezo Hernandez), hair and clothes, not to mention the absurd cast of characters, provides entertaining fun for most of its running time. 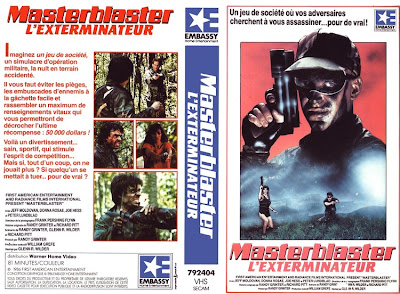 Speaking of some of the crazy characters (the movie is a character study if nothing else), we have Moldovan as Jeremy Hawk (not Jay Sherman's friend from The Critic), a man who really knows how to look at stuff. His reaction shots are priceless and worth the price of admission right there. As this is a "rural" movie, we have menacing redneck Leon (Antoni Corone), Snake and Monk (George Gill & St. George, respectively), the Cheech and Chong of the film. Many of the competitors have painted-on beards, which seems odd for the people that are supposedly the best in the world at this activity. There's Yoshimitsu Yamada as Yamada, "The Shadow Warrior", a nod to the Ninja Boom going on at the time. The "Oriental" music on the soundtrack every time he appears could be described as ill-advised, if not downright racist. Speaking of the soundtrack, there's bizarre, funny male operatic vocals that appear at times. Just weird.

There are others vying for the top paintball spot, but top, top honors go to Ray Forchion as Lincoln. He steals the movie with his hilarious performance. The man really stands up for his Kobe beef.

It's silly, there's funny dancing, alliances between paintballers (or "blasters" as they are called), and it all has a Young Warriors (1983)-style schizophrenia to it. It's pretty clear the filmmakers had no real grasp of what makes things suspenseful or interesting, but that's what makes Masterblaster so engaging. In the grand tradition of other "paintball gone wrong" movies such as TAG: The Assassination Game (1982), Gotcha! (1985), Hostile Intent (1997), and Backwoods (2008) , Masterblaster is recommended, even with its flaws, for Moldovan's stare, the performance of Ray Forchion, and all the 80's goodness it provides.

NOTE: Masterblaster was released on VHS in the U.S. by Prism. The box states the running time is 95 minutes, but it is actually 80 minutes.

I remember seeing this at the video store growing up and never taking the plunge. Now I'm curious.

It is worth seeing for the odd characters especially Raymond Forchion as Lincoln and great title song during the beginning. Would be interested in your opinion!

Do you remember what video store had the movie?

This a fun flick. Silly but kinda cool. It's needs a DVD release...

I definitely agree! That would be cool to see a DVD of this. It should have: Cast and Crew commentary by Jeff Moldovan, Ray Forchion, Big Mike Tiederberg and the director.

had no idea this movie existed. makes me want to listen to billy idol and play blaster master. i'm sure they'll turn that into a movie soon.

It definitely exists! would be interested in your opinion on it.

You're right, Blaster Master will probably be a movie soon. If they are making Monopoly and Battleship films, Hollywood will find other cool NES games to turn into movies like: Defenders Of Dynatron City or Splatterhouse.