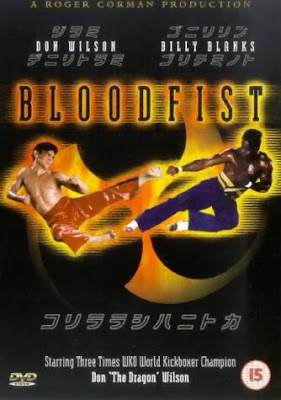 Jake Raye (Wilson) is an L.A. area kickboxing instructor. A lot of his time is spent regaling elementary school kids with tales of his missing kidney, which he generously gave to his beloved brother, who is also a fighter. When it is discovered that Jake’s brother has been killed because of shady dealings involving not taking a dive in underground punchfighting deathmatches, Jake goes to Manila to investigate.

Now a man lost in a strange land, he meets up with Kwong (Avellana), a wise old trainer. Kwong informs him of The Red Fist, a secret fighting society that holds the said deathmatches, called Ta Chang.  They hold yearly tournaments, that, according to Kwong, have “no rounds, no rules, no referees and no points”. Despite his kidney ailments, Jake must enter the tournament in order to get answers about his brother’s killer. So Kwong trains him, and Baby (Shaner), the “wacky” fighter, helps him out as well. There’s also the love interest, Baby’s sister Nancy (Bowman), and the token “mini-boss” fighter Black Rose (Blanks). Will Jake Raye kick and punch his way to the truth?

Hey, everyone has their own methods of getting answers. Columbo has questions, and Jake Raye has roundhouse kicks. Produced by Roger Corman, there, inexplicably, are nine Bloodfist movies. Only the first two have any connection to each other as The Dragon returns in the sequel as Jake Raye. But apparently this series has legs, whether the supposed sequels were in-name only or not. Looking through our local video store, we always noticed Bloodfist, mainly because of the title. We thought it was kind of silly, as if action movie makers have a list of prescribed words they must use to make a title. The list may go as follows:

We are announcing two new action movies to go into production: “Bloodpunch”, "Death Cage" and  “KickPuncher” (Which is also the name of the Robocop parody on "Community"). If you have any more words to add to this tentative list, please write in and leave a comment today.

Back to the Bloodfist, The Dragon is always watchable, and you like him as Jake, the good-natured fighter. Vic Diaz, who has been in every Filipino movie ever made, plays the policeman who hands Jake his brother’s ashes in a vase. I guess they cremate first and ask questions later. Joe Mari Avellana, a familiar face around these parts, is perfect as the wise elder who puts Jake through his rigorous training. A movie like this wouldn’t be complete without training sequences. Lastly there’s Billy Blanks in an early role just bein’ Billy. (Just Bein’ Billy should the name for an upcoming sitcom featuring Blanks). 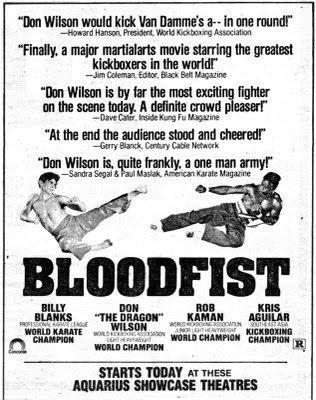 The big selling point of Bloodfist is its use of actual fighters, and their official titles and/or ranks appear on screen along with their names in the credits. This was just as important as who they are. While harsher  reviewers might call this nothing more than a Corman knockoff of Kickboxer (1989) or Bloodsport (1988), cooler heads should prevail and realize most DTV punchfighting product is all cut from pretty much the same cloth. Some are better than others. Bloodfist might not be the absolute best of the bunch, but it’s nowhere near the worst. It’s a fairly early entry into the punchfighting sweepstakes, and some sort of attempt was made to make it entertaining, what with the actual plot developments/twists, etc.

For its classic (or near-classic) status alone, Bloodfist is worth seeking out.

Great review, Kick puncher is already taken though, it's a parody title featured in the awesome Community. It's about a cyborg cop whose punches have the power of kicks!

Thanks! Oh right, totally forgot about that. Loved that parody.

Love the Vic Diaz mention. This one is very derivative, but also a rite of passage as far as DTV action goes, so it's a must. Also, to make your action film a sci-fi actioner, add "Cyber" "Cyborg" "Future" or a number in the multiple thousands.

That is so true! Thanks for the addition!